The three deaths on the sets of Kamal Haasan and Kajal Aggarwal's Indian 2 has left the whole industry in a shock. Many celebs have tweeted to condole the deaths of the technicians. 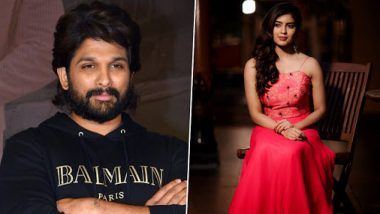 This morning we woke up to the horrific news of a terrible accident on the sets of Kamal Haasan's Indian 2 which claimed three lives. Lyca Productions tweeted about the unfortunate incident revealing the names of the deceased. Krishna (Assistant Director), Chandran (Art Assistant) and Madhu (Production Assistant) lost their lives in the mishap. In fact, Kamal Haasan and Kajal Aggarwal just missed getting crushed by the crane by a few seconds. Fans are obviously heartbroken about and so are many celebrities. Kamal Haasan Condoles Death of Three People on Film 'Indian 2' Set

Allu Arjun tweeted about it saying that he was heartbroken by the news. Amritha who was part of Vijay's Bigil recounted how the place is horrifying as something similar had happened during the shoot of Vijay's film as well. She feels it gives out lot of negative vibes.

This is really Sad ! That place is actually horrifying, the same kinda light fell on a person during BIGIL shooting and we were all shattered just like this one !! I just wish ppl don’t go there to shoot again or just don’t go there , lot of negative vibes 🙏🏼 RIP😭 https://t.co/bwJnRLJqW7

Death is natural.. but when untimely deaths happen it’s extremely heart breaking and frustrating.. we may not know those families but we have all experienced loss.. my heart goes out to the 3 families from the #Indian2Accident may their souls rest in peace..!! @LycaProductions pic.twitter.com/zIDmNL7Zu1

Absolutely heartbreaking to wake up to this new horrible news. May those souls rest in peace and we pray the injured recover quickly and fully. #Indian2Accident

Haasan has tweeted about the mishap and said how he lost three friends in it. Kajal Aggarwal condoled the deaths and also tweeted how she escaped being dead on the sets.

(The above story first appeared on LatestLY on Feb 20, 2020 02:19 PM IST. For more news and updates on politics, world, sports, entertainment and lifestyle, log on to our website latestly.com).