Joji is a black comedy-thriller directed by Dileesh Pothan. Fahadh Faasil plays the lead in the film and is also one of the producers. Baburaj, Shammi Thilakan, and Unnimaya Prasad form the supporting cast. Joji is streaming on Amazon Prime Video. 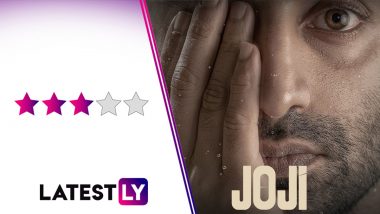 Joji Movie Review: Director Dileesh Pothan collaborates with his favourite actor Fahadh Faasil for the third time with his new directorial, Joji. As you are aware, both their previous ventures - Maheshinte Prathikaram and Thondimuthalum Driksakshiyum - have earned huge critical praise. With Joji, Dileesh Pothan enters Macbethian territory, or as he reveals in an interview, he had the story from ideas he got when he wrote a play on Macbeth years back. Irul Movie Review: Fahadh Faasil and Darshana Rajendran’s Fantastic Performances Stand Out in This Edgy Thriller.

Here, we meet Joji (Fahadh Faasil), the wastrel youngest son of a rich planter Planachel Kuttappan (PN Sunny). A well-built man who maintains his physique even for his age, Kuttappan's domineering nature keeps his children under his own roof, and leaves them often disgruntled and lacking in funds. Especially Joji, who is immensely frustrated of his father's controlling nature.

When Kuttappan gets a stroke and it feels like he is close to death, Joji is secretly jubilant. The other members of his family, like Joji's wimpy second-eldest brother Jaison (Joji Mundakayam) and his wife Bincy (Unnimaya Prasad) also act indifferent towards the imminent passing away of the patriarch. Even their family friend Dr Felix (Shammi Thilakan) wants him to be done away with, so that he can interfere more in the family affairs and get more of that fine whiskey from Kuttappan's cupboard.

The only person who shows some amount of grief is the eldest brother, Jomon (Baburaj), an alcoholic divorcee who lives in the same house with his teenage son Popy (Alister Alex), the latter seen in the beginning ordering an airgun online by pilfering money from his grandfather. But unlike the cracked dysfunctional family in KG George's dark masterpiece Irakal, the Planachal kutumbam is merely opportunistic.

However, Kuttappan's surprise recovery proves to be a setback to the well-laid dreams of the family members, especially Joji. With greed already ruling in his mind, Joji takes some extreme steps to get back what he nearly gained, while his guilt slowly catches up on him.

An intelligent filmmaker taking on an Shakespearean tragedy does raises huge expectations for Joji. The fact that the movie is written by Syam Pushkaran, who also wrote both the director's earlier works raises the level much higher. With Dileesh Pothan working with Fahadh again, I expected them to make a good hattrick here. Pushpa: Fahadh Faasil to Play Villain in Allu Arjun, Rashmika Mandanna Starrer.

With this kind of creative power coming from its kettle, Joji delivers for most of its parts, and yet feels lacking in other portions. Surprisingly for a film inspired by not one but two Shakespearean dramas - Macbeth and King Lear, Joji has plenty of dark humour in its narrative. The performances are fantastic, and once the first big twist happens, our curiosity is well-piqued as to where the film is heading for its greedy protagonist, who also is the movie's antagonist. It is a more contained and quieter story than Pothan's earlier efforts - it takes nearly an hour mark for the BG score to play in. The greed the characters display when the patriarch gets incapacitated has plenty of wicked humour. Also how smartly has the film brought in the use of masks - Joji is set during the ongoing pandemic - which are more here to protect people's real expressions from being revealed to the public than from any virus!

But once the first big dark turn is done and Joji enters the Macbethian territory, it goes on a predictable path, as the film's anti-hero goes on to make more mistakes to achieve his goals (I was kinda reminded of Sriram Raghavan's brilliant Johnny Gaddaar here). The pacing continuous to slacken while the dialogues get more and more devilish (had a laugh at that 'Society Oru May*re Aanu!' line).

Some of the dark humour, however, gets lost; I needed more of that ego-driven banter between Jomon and an equally stubborn priest, Father Kevin (Basil Joseph). The balance between the black comedy and psychological thriller that Joji turns to be later, is something the film fails to maintain in the concluding reels. Though that's regained in the movie's epilogue scene that brings a sense of justice that feels both cruel and yet poetic.

Fahadh Faasil is once again great in a role that he should be a pro by now - playing morally dark ambiguous characters - and his performance (and his eyes) carries the film throughout. Baburaj also delivers a fine act as the son who wants to fill in his father's big shoes. Unnimaya Prasad is fantastic as the conflicted Bincy, who is a standin for Lady Macbeth but without the scheming and prodding. All she wants is a respite from this house to a more independent space, but the context has to be inferred than being outrightly explained.

Another striking feature is Shyju Khalid's cinematography, particularly loving the bird's eye view of a motorcycle riding on a road through some plush greenery at the beginning of the film. Another terrific example is a kitchen shot framing Bincy in a kitchen and Joji in the passageway together, with both contemplating their respective unsure futures.

- Some Good Doses of Black Humour

- The Second Half Feels Underwhelming

Joji is Dileesh Pothan's darkest creation to date - a cataclysmic tale of avarice. The pacing may not be very viewer-friendly and Joji may be Pothan's weakest film to date (a wacky comparison because the other two films raise sky-high benchmarks). But its twisty narrative infused with black comedy and the awesomeness of Fahadh makes this a highly recommendable watch. Joji is streaming on Amazon Prime Video.

(The above story first appeared on LatestLY on Apr 07, 2021 12:27 AM IST. For more news and updates on politics, world, sports, entertainment and lifestyle, log on to our website latestly.com).