Kajal Aggarwal Birthday: Did You Know That the South Actress Made Her Debut With a Bollywood Film Starring Aishwarya Rai? (Watch Video)

We all know Kajal Aggarwal as a superstar down South. But we bet you had no clue that her debut movie was a Bollywood one that starred Vivek Oberoi and Aishwarya Rai Bachchan. Read on. 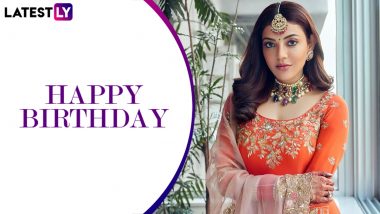 Kajal Aggarwal celebrates her birthday today (June 19). She might be predominantly known for working down South, but she has appeared in a few Hindi films too. The actress is a power-packed performer and over the years has left a positive impression on the minds of the audience and critics alike. Some of her superhit South films include Magadheera, Baadshah, Thuppakki and more. But did you know that the actress made her debut in showbiz with a Bollywood movie? Yes, Kajal stepped into the filmy world by starring in Kyun! Ho Gaya Na (2004) that had Aishwarya Rai Bachchan and Vivek Oberoi as leads. Kajal Aggarwal Hitched! From Pastel to Bright Pink, Here’s Decoding the Colour Palette of Her Wedding Look Book!

FYI, Kajal’s role in the Hindi movie was a little one but even after the same, she did create a mark. She essayed the role of Aishwarya’s sister Diya in the film. That’s not it, as Aggarwal also danced alongside Aish in a popular melody titled Pyaar Mein Sau Uljhane. Well, with this, we can definitely say that Kajal did make her debut with a Bollywood film but now is a superstar in the South. Uma: Kajal Aggarwal Roped In for a Slice-of-Life Film Helmed by Tathagata Singha!

Apart from this, Aggarwal also has starred in Bollywood films like Singham (2011) and Special 26 (2013). Meanwhile, on the work front, she will be soon seen in the Tamil remake of the Hindi flick Queen. LatestLY wishes Kajal Aggarwal, a very happy birthday!

(The above story first appeared on LatestLY on Jun 19, 2021 12:00 AM IST. For more news and updates on politics, world, sports, entertainment and lifestyle, log on to our website latestly.com).