Nithiin plays an atypical role as a blind piano player in his milestone 30th film directed by talented director Merlapaka Gandhi. The film has cinematography handled by J Yuvaraj. 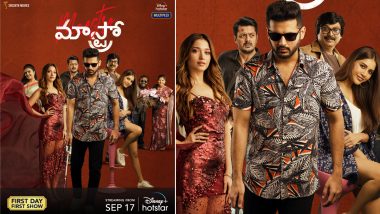 Helmed by Merlapaka Gandhi, Maestro is an official remake of Bollywood film Andhadhun that starred Ayushmann Khurrana, Tabu, Radhika Apte in major roles. The South version of the same released on Disney+ Hotstar on September 17 and stars Nithiin, Tamannaah Bhatia, and Nabha Natesh. A lot of hope has been attached to the movie as it sees brilliant artists in one frame. The reviews of Maestro are out and going by the same, we feel it has not clicked with the critics much. Many have given Andhadhun more points than this one. Here, check out the verdict below. Maestro Trailer: Nithiin, Tamannaah Bhatia, Nabha Natesh’s Mystery Thriller Promises to be a Faithful AndhaDhun Remake (Watch Video).

Koimoi: "The thought of remaking already existing gems is alien to me altogether. And of the ones that are from the recent past is bizarre. Maestro might have been a spectacular film if Andhadhun didn’t exist, but that ‘if’ is a privilege the film doesn’t have."

Indian Express: "When people can access the original from the comforts of their home, why should anyone suffer through its duplicate? Of course, it makes sense if a filmmaker wants to remake a film if he or she has a new take on the material that could turn the original idea on its head and radically challenge the perspective of the viewers, who have already seen the original film. Then, there is some value to it."

TOI: "That said; Maestro might not be the classic Ilairayaaja number it set out to be but it still remains as catchy as the latest peppy number. That makes it worth a watch." Maestro Promotional Song Shuru Karo: Nithiin, Tamannaah Bhatia and Nabha Natesh’s Track Is Catchy and Groovy (Watch Video).

Gulte: "For the audience who have not watched the original, this Maestro would be interesting with a lot of surprises. The neat screenplay and cinematography also make it good watch. They will enjoy and intrigued by the plot strength with good twists. But for the audience who already have watched Andhadhun, the comparisons take the front seat and it will be up to them."

Well, what do you think after reading the above reviews? Tell us in the comment section below. Stay tuned!

(The above story first appeared on LatestLY on Sep 17, 2021 12:45 PM IST. For more news and updates on politics, world, sports, entertainment and lifestyle, log on to our website latestly.com).