Kaathuvaakula Rendu Kaadhal is the upcoming rom-com that is written and directed by Vignesh Shivan. The film features Nayanthara, Vijay Sethupathi and Samantha Akkineni in the lead roles. 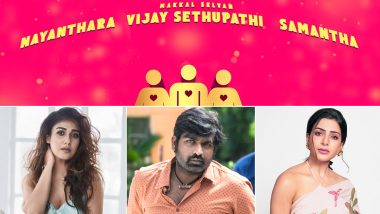 Kaathuvaakula Rendu Kaadhal is the upcoming rom-com that is written and directed by Vignesh Shivan. The film features Nayanthara, Vijay Sethupathi and Samantha Akkineni in the lead roles. It is a love triangle produced under the banners of Seven Screen Studio and Rowdy Pictures. It was on the occasion of Valentine’s Day this year when Vignesh Shivan dropped a teaser and announced about this project and since then fans have been eagerly waiting to know more details about it. But everything came to a halt when lockdown had to be imposed due to the ongoing global crisis. Kaathuvaakula Rendu Kaadhal: Vignesh Shivan Makes Valentine's Day Special by Announcing his Romantic Comedy with Nayanthara, Samantha Akkineni and Vijay Sethupathi.

The shooting of several films had to be delayed and the release date of films had to be pushed back. The Tamil Nadu government has permitted some of the makers to resume with the post-production works of the pending film, but by following all the guidelines. The shooting of films have been suspended from mid-March and there is no clarity by when the makers will get to resume the shooting of the pending projects. As per a tweet shared by industry expert Ramesh Bala the makers of Kaathuvaakula Rendu Kaadhal will kick-start the shooting of the film from August. However, there has been no official update on it yet. Tamil Film Producers Council Requests TN Government to Grant Permission to Resume Shooting?

Thank you @VijaySethuOffl #Nayanthara @anirudhofficial for always being there for me :)

Special thanks to the amazing @Samanthaprabhu2 for coming on board 😇🥳

This is the first time that Nayanthara and Samantha Akkineni would be sharing screen space. We bet, fans are going to go bonkers when the lead heroines would feature together on the big screens along with Vijay Sethupathi. The music of Kaathuvaakula Rendu Kaadhal will be composed by Anirudh Ravichander.

(The above story first appeared on LatestLY on May 22, 2020 01:57 PM IST. For more news and updates on politics, world, sports, entertainment and lifestyle, log on to our website latestly.com).