Mookuthi Amman is the upcoming flick starring Nayanthara and RJ Balaji in the lead role. This Tamil film is directed by RJ Balaji and NJ Saravanan. 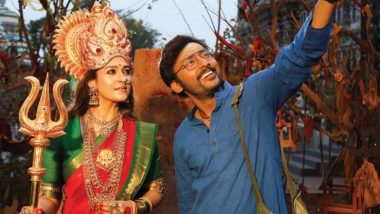 Mookuthi Amman is the upcoming flick starring Nayanthara and RJ Balaji in the lead role. This Tamil film is directed by RJ Balaji and NJ Saravanan. When the makers had released the Lady Superstar’s first look from the film, fans were left stunned. Her avatar as a goddess left everyone impressed. We all know that Nayanthara would be playing the role of Goddess Amman in this movie and it has been one of the most awaited projects of her. This movie was scheduled to be released in May, but had to be postponed in the wake of coronavirus outbreak. Nayanthara Starrer Mookuthi Amman Will Hit Theatres and Not Opt For Direct OTT Release, Confirms RJ Balaji.

But the makers of Mookuthi Amman have a sweet treat for all fans of Nayanthara and RJ Balaji. The team has shared a series of new stills that features not only the lead actors, but the complete cast. These pictures are some of the working stills and the makers have also revealed that the post-production work is going on in full swing. If you haven’t checked it yet, you got to take a look at them right away. Mookuthi Amman First Look Out! Nayanthara Looks Divine as a Goddess (See Pics).

For this upcoming spiritual flick, produced under the banner of Vels Film International, not only Nayanthara, but the entire cast opted for vegetarian diet during the shooting process. In November last year, it was out that the actress has turned vegan to play the role of a goddess in this Mookuthi Amman. Regarding its release, the makers have clarified that this movie will release in theatres first and will not be released directly on the OTT platform.

(The above story first appeared on LatestLY on Jun 04, 2020 02:10 PM IST. For more news and updates on politics, world, sports, entertainment and lifestyle, log on to our website latestly.com).