It was during an Insta Live session when RJ Balaji cleared the air about the release of Mookuthi Amman, starring Nayanthara in the lead role. 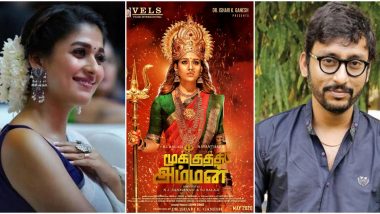 The current situation in the country and many other regions across the globe led to the theatres been closed down in order to avoid mass gathering. One of the key protocols in order to curb the spread of COVID-19 is maintaining social distancing. Due to the lockdown imposed owing to the coronavirus outbreak and with no clarity by when situations be restored to normal, many producers decided to release their movies on OTT platform. In fact, five south films have been confirmed to premiere on one of the popular streaming platform. Now there were rumours on Nayanathara starrer Mookuthi Amman getting a direct web release, but the film’s director RJ Balaji has clarified that the film will not skip its theatrical release. Mookuthi Amman First Look Out! Nayanthara Looks Divine as a Goddess (See Pics).

It was during an Insta Live session between industry expert Kaushik LM and RJ Balaji when the latter cleared the air about the release of Mookuthi Amman. This film marks the directorial debut of actor RJ Balaji. NJ Saravanan would be co-directing this film. Mookuthi Amman was scheduled to be released in May, but due to the current scenario, just like many other films even this one had to be postponed. It was during an interaction with the industry expert that RJ Balaji clearly stated that Mookuthi Amman will not skip its theatrical release. He mentioned that the film will not be released directly on the OTT platform. 5 South Movies Confirmed to Premiere on Amazon Prime Video!

It is said that lady superstar Nayanathara would be seen playing the role of a deity in Mookuthi Amman. Besides directing, RJ Balaji would also be playing a key role in this movie. The film is produced by produced by Ishari K Ganesh under Vels Film International banner.

(The above story first appeared on LatestLY on May 25, 2020 01:48 PM IST. For more news and updates on politics, world, sports, entertainment and lifestyle, log on to our website latestly.com).