SS Rajamouli has revealed the reason behind titling his upcoming film RRR. He will be seen as a special guest along with the film's stars Jr NTR, Ram Charan and Alia Bhatt, on The Kapil Sharma Show. 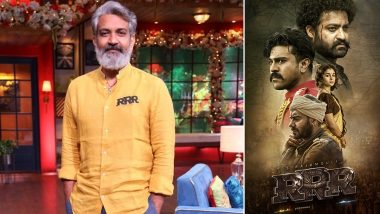 Rajamouli shares: "In the beginning, we didn't know what to put the title as, so we thought we should refer to the project as 'RRR' because of - Ram Charan, Rama Rao (Jr NTR) and Rajamouli. We started putting hashtags as RRR and the response of the audience was overwhelming so we kept 'RRR' as the title." RRR: Jr NTR, Ram Charan Dubbed in Hindi for the Magnum Opus in Their Own Voices, Reveals Alia Bhatt.

(The above story first appeared on LatestLY on Dec 30, 2021 02:01 PM IST. For more news and updates on politics, world, sports, entertainment and lifestyle, log on to our website latestly.com).