Paava Kadhaigal Movie Review: Kalidas Jayaram and Sai Pallavi’s Segments Stand Out in This Netflix Anthology That Is Hard-Hitting But Not As Impactful (LatestLY Exclusive) 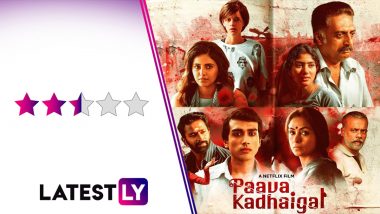 Paava Kadhaigal Movie Review: Yet another Tamil anthology enters the OTT space after the much-talked about Putham Pudhu Kaalai. If PPK was on Amazon Prime, then Netflix has its own Paava Kadhaigal. For the Netfix anthology, Sudha Kongara, Vignesh Shivan, Gautham Vasudev Menon, and Vetrimaaran join hands to give us four hardhitting tales, that are a far cry from the stories we saw in Putham Pudhu Kaalai. Paava Kadhaigal Trailer: Gautham Menon, Vetri Maaran's Anthology Film On Love And Honour Switches From Sweet To Bitter In An Instant.

Thangam (Pride) - Sudha Kongara is one of the few people on Planet Earth who is having a great year in 2020. In my humble opinion, I loved her segment the most in Putham Pudhu Kaalai. Sudha also made a heartwarming underdog tale in Suriya's Soorarai Pottru. And to my utter lack of surprise, I favoured her segment in Paava Kadaigal over the others purely because of the kind of impact that it serves. Also, it features a scintillating turn from the young Kalidas Jayaram, who was also in her segment for PPK. Putham Pudhu Kaalai Movie Review: The Amazon Prime Anthology Film Brings Well-Acted Heartwarming Stories of Love, Bonding and Miracles!

Kalidas plays Sathaar, a Muslim trans person in a village in the early '80s. Often abused and beaten by his father for his 'behaviour' and mocked by his villagers, Sathaar still takes up the insults with a smile. His best friend is Sarawanan (Shanthnu Bhagyaraj), on whom Sathaar has a crush on, but Sarawanan loves Sathaar's sister Sahira (Bhavani Sre). Trouble arrives when the couple is caught by the parents, and now Sathaar has to help them escape.

Thangam is a heartbreaking tale that's simply but effectively told, where you get to feel nearly all the emotional beats. It is elevated by a stupendous performance from Kalidas Jayaram, whose tragic portrayal is wrenching to watch, be it the moment when he finds out that the man he loves never sees him that way. Or when his mother (Vinothini Vaidyanathan) refuses to open the door for him, when he is chased by the village goons.

Shantnu Bhagyaraj as Sathaar's good-hearted friend is also impressive, even getting to put in a little mass moment of his own, despite the narrative around that moment comes after a disturbing revelation. The song "Thangam" adds a sadly beautiful layer to the segment.

Love Panna Uttranum (Love) - Director Vignesh Shivan, when not directing his ladylove Nayanthara, is someone known for merging humour, mostly seamlessly, into his films. The same factor keeps cropping in his short that deals with honour killings. Now, laughter isn't something that you associate with a crime as heinous and terrible as killing someone for the sake of honour and caste. So Love Panna Uttranum leaves you with mixed feelings.

The story is about two twin sisters Aadhilakshmi and Jothilakshmi, both played by Anjali. Their father Veerasimman (Padam Kumar) is the village head, who wears his caste like a crown on his head. If in the day, he carries out inter-caste marriages, in the night, his men kills the same couple to achieve 'balance' (incredulously using the analogy of how Jack and Rose's doomed love is what made Titanic so memorable).

When Aadilakshmi tells her father that she loves their driver, he reluctantly agrees to give her the same treatment as the other couples. Aadilakshmi leaves her sister, who is in the city, with the impression that their father has changed, prompting Jothi to return to her village with her two friends, Penelope (Kalki Koechlin) and B-Cube (Tony Sebastian), little knowing the fate that has befallen her sister. If her father can't bear an inter-caste marriage, how will he react to same-sex love?

Like I pointed out before, even though Love Panna Uttranum has a hardhitting tale to say, Shivan infuses some humorous moments, both dark and otherwise in the screenplay. I am not sure how the other viewers would see it, but I found these scenes standing out like a sore thumb in what should have been a distressing take on filicide. The third act of the segment is the weakest, including a couple of twists. Though Love Panna Uttranum leaves with a happy ending (which you really can't say for the rest of the stories here), it comes at the cost of jarring tonal issues. Where an important death doesn't have much consequence and we get an out-of-place rap song sequence.

The biggest take away from the segment is a scene-stealing turn from Jaffer Sadiq as the diminutive right-hand man who is even more menacing than his boss.

Vaanmagal (Sin) - This short film is about a family of five, whose idyllic life is shattered when their younger daughter, a minor, is sexually assaulted. The father (Gautham Menon) is unable to understand in how to deal with the situation. The mother (Simran Bagga) tries to hide it from their villagers, as she keeps 'cleaning' her daughter off her scars. Their teenage son (96's Aadhitya Baaskar) vows to find out who the culprit is, and is angry with his parents for not reporting the crime to the police. How the family deals with this tragedy is what the rest of this segment is about.

Films on sexual assault needs some sensitivity on how they are dealt with, a factor that is sparsely seen in this segment. Menon has dealt with the crime itself and how the family deals with the consequences in an adequate manner without sensationalising. He also adds a couple of really well-written moments, like when the father laments how he is going to explain to his daughter that the world isn't all bad. But then the movie takes some very irresponsible turns towards the latter half, including a cop-out twist, and some lame messaging. I get it that for ordinary folks like most of us, relying on law and order to get justice for crimes like rape is next to impossible in our country, but relying on vigilante justice is highly irresponsible.

Menon the director still leaves some of his flourishes in the story, but casting himself in the film was a bad idea. While Menon delivered a surprisingly good turn in Kannum Kannum Kolaiyadhataal, here he is pointedly blank in emotional scenes that deserved a better actor. Simran fares better, but her performance is let down by the writing.

Oor Iravu (Honour) - Vetrimaaran's Oor Iravu is also about a family placing their honour above love and care for their child. Here, a father (Prakash Raj) goes to meet her estranged daughter (Sai Pallavi), who had eloped with her lower-caste lover. She is now living happily with him in the city and is pregnant, when the father visits her after months of no-contact. He wants to bring her back in the village where he wanted to her deliver her baby there. But can he really forgo what he sees as a shame on his honour over the love for his daughter?

After Thangam, Oor Iravu leaves the best impact, more so for some of its raw, powerful moments and effectively devastating performances from Prakash Raj and Sai Pallavi. Vetrimaaran is known for putting some gut-wrenching sequences in his film, and it's no different here, where an agonising scene between the father and the daughter, while she is having problems with her pregnancy, is unsparing in how the pain, anguish and heartbreak is shown. I was a little miffed with its weak animated ending, but you can't forget the sequence that came before.

Paava Kadhaigal deals with hard-hitting themes of society putting honour and prestige above the life of a woman, or boundary-less Love. But the treatment and the lack of needful impact make the anthology a mixed-bag affair. Paava Kadhaigal is streaming on Netflix.

(The above story first appeared on LatestLY on Dec 18, 2020 01:30 PM IST. For more news and updates on politics, world, sports, entertainment and lifestyle, log on to our website latestly.com).