BJP MP and Adivasi Leader Soyam Bapu Rao has threatened to burn down multiplexes and theatre chains if Rajamouli doesn't change the depiction of Jr NTR's character in the movie. 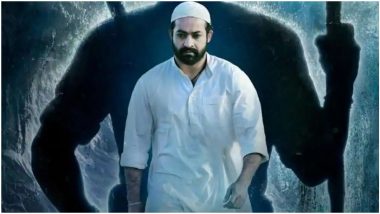 SS Rajamouli's RRR starring Ram Charan and Jr NTR is making headlines for all the wrong reasons. While everything was going fine and working in Rajamouli's favour, the recent teaser unveiling of Jr NTR's character, Komaram Bheem has irked the religious sentiments of many. For the ones who aren't aware of the controversy, it started after Jr NTR's character was shown as Muslim in the teaser. The ones opposing this idea are now publicly issuing threats if the filmmaker doesn't make necessary changes in the character. RRR: Jr NTR Looks Fierce as Komaram Bheem and His Bravura Act Will Leave You Spellbound (Watch Video).

BJP MP and Adivasi Leader Soyam Bapu Rao has threatened to burn down multiplexes and theatre chains if Rajamouli doesn't change the depiction of Jr NTR's character in the movie. "The film has already completed 40% of its shooting, but as there’s still 60% of it left -- remove the surma, skull cap and pyjama and try to show the genuine Komaram Bheem-- else we will see to that the film doesn’t get released. Even if it does, we won’t hesitate to burn down theatres,” said the MP in his interaction with a news channel.

The sitting MP further targeted Rajamouli and warned him of dire consequences by saying, "We have no objection if you want to highlight Komaram Bheem but if you hurt the sentiments of Adivasis, we won’t tolerate it. If you (Rajamouli) continue with ‘let Adivasis do whatever they want, I will do whatever I want’ kind of attitude, you will have to face serious consequences.” RRR: Jr NTR’s Komaram Bheem Dressed Up in Muslim Attire Piques Fans’ Interest, Here’s a Brief History of the Adivasi Revolutionary That Explains His Religious Identity.

Contradicting Bapu Rao's views, journalist and founder of Adivasi Resurgence, Akash Poyam in his profile on the revolutionary leader writes, “These narratives argue that Bheem’s resentment against Nizam was because of ‘Islamic’ oppression on Hindus and destruction of Hindu culture. When Gond Adivasis are not even Hindus, how does Bheem become a Hindu icon leading the battle against ‘Islamist’ oppression?”

SS Rajamouli is yet to react to the controversy and knowing him, chances are he'll let his work do all the talking.

(The above story first appeared on LatestLY on Oct 30, 2020 11:50 PM IST. For more news and updates on politics, world, sports, entertainment and lifestyle, log on to our website latestly.com).