Suresh Gopi and Shobhana to Reunite After 14 Years; Films the Manichitrathazhu Duo Starred In

Suresh Gopi and Shobhana became a hit onscreen pair after they were featured together in the 1993 film, Manichitrathazhu. But that wasn’t the film in which they worked together for the first time. Even before that, this duo worked together in many other films. 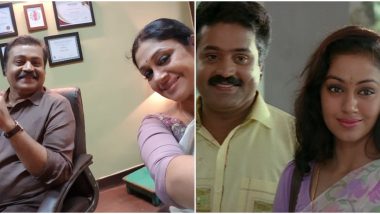 Suresh Gopi and Shobhana became a hit onscreen pair after they were featured together in the 1993 film, Manichitrathazhu. But that wasn’t the film in which they worked together for the first time. Even before that, this duo worked together in many other films. The last film in which Suresh Gopi and Shobhana were seen was in the 2005 film Makalkku. After 14 years the two are all set to reunite for a project (produced by Dulquer Salmaan), and fans just cannot wait to see Nakulan and Ganga (their character names in Manichitrathazhu) back on the big screens.

On the occasion of Durga Ashtami 2019, Suresh Gopi shared a picture on Facebook that also featured Shobhana and captioned it Malayalam (which translated in English) that read, “When Nakulan reunited with Ganga on Durga Ashtami Day”. The duo just related to one of the popular climax scene in Manichitrathazhu, and that left all their fans absolutely thrilled. As Suresh Gopi and Shobhana are prepping for their upcoming flick, let’s take a look at the films in which this popular duo have starred in in the past.

Vrutham – This 1987 film starred Kamal Haasan and Shobhana in the lead roles. It was almost after a gap of five years that Haasan returned to Malayalam films. Suresh Gopi was seen in a supporting role in this flick.

Dhwani – The 1988 movie was the last film of Malayalam industry’s evergreen actor, Prem Nazir. Shobhana was seen playing the role of his daughter and Suresh Gopi was seen as a minister’s son.

Innale – It is an emotional love story in which Shobhana who forgets her past life and her identity after meeting with an accident. Suresh Gopi aka Dr. Narendran plays the role of Gauri’s husband. This movie shows how Gauri who is then called as Maya (after accident) falls in love with a man who takes of her during the most crucial times and helps her start her life afresh.

Pappayude Swantham Appoos – It revolves around the relationship between a father (Mammootty) who is depressed after the death of his wife (Shobhana) and his son (Badusha). Suresh Gopi was seen portraying the character of Dr Gopan, who is also a close pal of Balachandran.

Manichitrathazhu – This was the first time when Suresh Gopi and Shobhana’s pairing became a huge hit. Their character names Nakulan and Ganga became talk of the town back then.

Commissioner – Suresh Gopi was seen as an honest cop, the city police commissioner Bharathchandran. Shobhana was seen as his fiancé, a lawyer named Indu.

Rajaputhran – Directed by Shajoon Kariyal, Suresh Gopi (Anand) was seen as a wildlife photographer and Shobana (Veni) was his ladylove. This revenge drama was a huge hit at the box office.

Makalkku – Shobhana is seen playing the role of a mentally ill woman, who gives birth to her daughter on the streets. The child is raised in a hospital by Dr Warrior (Suresh Gopi).

And Here’s One By Anoop Sathyan

Suresh Gopi and Shobhana are going to reunite after 14 years in a film directed by Anoop Sathyan. It will also feature Kalyani Priyadarshan in a key role. This yet-to-be-titled project will be produced under the banner of Wayfarer Films in association with M Star Communications.

(The above story first appeared on LatestLY on Oct 07, 2019 05:06 PM IST. For more news and updates on politics, world, sports, entertainment and lifestyle, log on to our website latestly.com).