The Mandalorian: Ludwig Göransson's Theme of the Star Wars' Show Gets a Gorgeous Music Video 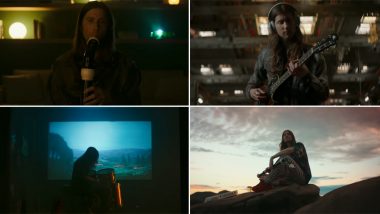 If you have been a fan of the Star Wars' Disney Plus series, The Mandalorian, we bet one of the biggest highlight of the series for you has been the theme of the series. The Mandalorian score is without a doubt one of the best we 've seen in recent times. The credit for this beautiful score goes to composer Ludwig Göransson. The Swiss composer is an Academy awardee and recently released a music video taking us behind-the-scenes of him composing the score for the star wars series. Göransson found major success after winning the Academy Award for Best Original Score and the Grammy Award for Best Score Soundtrack for Visual Media for Marvel Studios' Black Panther.The Mandalorian: Disney Plus Series' Third Season is Already In the Works.

In the new video released by Disney Plus, we see the composer performing his own score, live, partially on the actual set of The Mandalorian. The series' second season is expected to release in a few months and fans are super excited for the same. Sharing the video, The Mandalorian handle tweeted as, "Watch as the Oscar-winning composer @Ludwiggoransson performs the theme from #TheMandalorian."The Mandalorian Season 2: Rosario Dawson’s Casting as Ahsoka Tano for Star Wars Spin-Off Series Isn’t Confirmed Yet.

Speaking about how he composed the Mandalorian theme, he told Vanity Fair in an interview, "He showed me some artwork and pictures. I got very inspired, and I just closed myself off in my studio for a month and surrounded myself with all different instruments."

The composer has also worked on the musical score for Christopher Nolan's upcoming release Tenet. The film is all set to release on August 12.

(The above story first appeared on LatestLY on Jul 10, 2020 02:57 PM IST. For more news and updates on politics, world, sports, entertainment and lifestyle, log on to our website latestly.com).