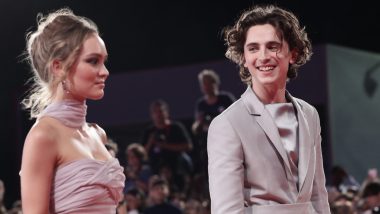 Timothée Chalamet and Lilly Rose-Depp might no longer be a couple, but the internet is forever. Their pale pictures of making out on a yacht went viral online on a global scale. Memes continue to be churned out on the pics even today. Finally, Chalamet has opened up about the pictures. "I went to bed that night thinking that was one of the best days of my life,," Chalamet said in an interview reminiscing the trip he took with his The King costar.  He continued, "I was on this boat all day with someone I really loved, and closing my eyes, I was like, indisputably, ‘That was great.’ And then waking up to all these pictures, and feeling embarrassed, and looking like a real nob? All pale?" Timothée Chalamet Sparks Dating Rumours With Eiza Gonzalez After Pictures of the Duo Kissing in Mexico Go Viral! (View Pics).

The actor said that he was also quite taken aback by the fact that people thought it was a PR stunt. He said, "And then people are like: This is a P.R. stunt. A P.R. stunt?! Do you think I'd want to look like that in front of all of you?!” Don't Look Up: Meryl Streep, Leonardo DiCaprio, Timothee Chalamet and More Celebs To Be a Part of Netflix Comedy!

Rumours of Chalamet and Depp's romance started swirling in October 2018, when they were photographed grabbing coffee in New York and taking a walk in Central Park. They broke up in last spring. Earlier, in June Chalamet was spotted kissing Eiza Gonzalez, making headlines once again.

(The above story first appeared on LatestLY on Oct 15, 2020 10:57 PM IST. For more news and updates on politics, world, sports, entertainment and lifestyle, log on to our website latestly.com).