The next episode of Bigg Boss 14 will see the big switch - Red Zone contestants argue with Green Zone on why they are more deserving to be in the green zone and the call remains in Eijaz's hands. Do we sense some partiality by the new house captain here? 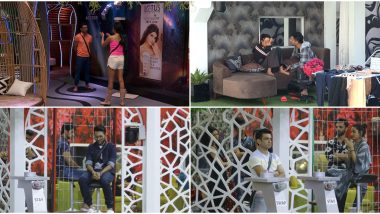 The next episode of Bigg Boss 14 will see the big switch - Red Zone contestants argue with Green Zone on why they are more deserving to be in the green zone and the call remains in Eijaz's hands. Do we sense some partiality by the new house captain here? The episode sees lots of drama between the contestants during and after the captaincy task, Eijaz and Kavita's pointless mudde pe jhagda and the switch. Here are 5 highlights of tonight's episode of the show. Bigg Boss 14 October 29 Synopsis: Jasmin Bhasin Tells Shardul Pandit That She Feels 'Unsafe' Having Rahul Vaidya Around.

These red zone members come out and Rahul successfully snatches Eijaz' bag but does not place it in the red zone. Pavitra takes Shardul's bag and gets him disqualified. Both Rahul and Pavitra attack Abhinav with full force and the trio struggles while Rubina keeps reprimanding Rahul and Pavitra for excessive use of force. Abhinav gets hurt and hurls the bag away. Pavitra gets a panic attack when she starts justifies her actions and says that she held Abhinav with care and did not man-handle him. Bigg Boss 14 October 28 Episode: Jaan Apologises, Pavitra Makes Heart-Shaped Paratha For Eijaz - 5 Highlights of BB 14.

Rahul apologises to Jaan for his comments on Jaan's parents and separation. Jaan forgives Rahul. Jasmin Bhasin on the other hand tells Rubina that she is having restless nights remembering Rahul's aggression.

Bigg Boss declares Eijaz Khan the new captain of the house and Pavitra hugs him. Later on, Naina breaks down over Bigg Boss telling her to not make her own rules. Eijaz Shardul and Jasmin console her. Abhinav continues to speculate who did wrong and Rubina tells him that the decision will go towards those who give more TRPs and get more coverage.

Jasmin Bhasin confides in Shardul Pandit that she is not able to sleep at nights after her fight with Rahul Vaidya during the captaincy task. She says that she feels unsafe with Rahul around.

Bigg Boss announces that Eijaz has the power to get red zone members to the green zone. Red zone members can call their green one opponents and put forth why they are more deserving to be in the green zone. The final call will be in Eijaz' hand. Nikki nominates Kavita and Eijaz savs Nikki. Eijaz gets worked up over Kavita's comment of being issues and takes her accusations to heart.

Well, now that was one loud episode, don't you agree too? In the next episode, we'll see Eijaz break down about Kavita's harsh statements and breaks down in front of Nikki that he has major trust issues.  Jaan and Nishant's strong friendship breaks. Rahul and and Jasmin get their issues out and Pavitra and Rubina go for each other.

(The above story first appeared on LatestLY on Oct 30, 2020 12:13 AM IST. For more news and updates on politics, world, sports, entertainment and lifestyle, log on to our website latestly.com).