Bigg Boss 14: Rahul Mahajan Says He Stands By His 'Cheap' Comment on Rakhi Sawant, Says The 'Disgusting' Things Done By Her Were Not Shown Outside

In one of the episodes, after Rakhi's outburst at Rahul not being a good friend, Rahul lashed out at her and said many things, one of which was calling her and her fans cheap. This obviously did not go down well with Rakhi and her fans and they all lashed out at Rahul. 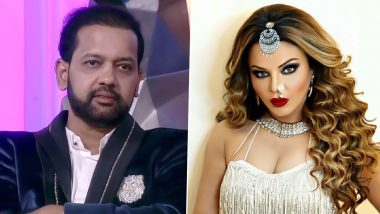 Rahul Mahajan, who was the last contestant to get evicted from Bigg Boss 14, entertained us all a lot. In fact, his on and off dosti ke kisse with Rakhi Sawant and Nikki Tamboli were very funny, until they were not one day. In one of the episodes, after Rakhi's outburst at Rahul not being a good friend, Rahul lashed out at her and said many things, one of which was calling her and her fans cheap. This obviously did not go down well with Rakhi and her fans and they all lashed out at Rahul. Bigg Boss 14’s Rahul Mahajan on Rakhi Sawant: “I Am Not Judging Her Here but I Won’t Be Supporting Her Outside the Show.”.

Talking about that incident, Rahul Mahajan, in a recent interview, stated that he stands by what he said, no matter the backlash. "I still stick to my words. During my fight with Rakhi where I called her a cheap celebrity, all I was asking her was to hear my side, but she refused to. Instead, she started showing me her a**," revealed Rahul to ETimes TV. Bigg Boss 14: Rakhi Sawant Tears Rahul Mahajan’s Dhoti in a Prank Gone Far; Aly Goni and Rahul Vaidya Condemn the Act (Watch Video).

He continued, "She was thinking that when she will do such things, the audience will get happy and there are people who like such behaviour. I would like to tell people, if you watch such acts for 10 minutes you might enjoy it but just try to live with Rakhi for 10 days, you won't be able to tolerate her. The audience might enjoy seeing it on camera but we were staying with her under one roof daily and we were not enjoying it. I don't think even the production people, or camera guys of Bigg Boss would be enjoying it."

Explaining his analogy of calling out Rakhi's fans as well, Rahul clarifird, "There have been so many fake babas in our country who have been culprits. I feel if they were culprits, their followers were culprits to another level. Similarly, if followers don't support a cheap level, celebrities would not be able to do cheap acts. I know I got a lot of hate on social media for this. But I feel ye desh ka durbhagya hai... This shows we are desperate for cheap comedy acts. If we have to sit and analyse what we want," he said. Bigg Boss 14 December 31 Synopsis: Rakhi Sawant Tears Rahul Mahajan’s Dhoti in a Task; Will She Be the Next Captain?.

Dismissing the popular opinion that Rakhi is being victimised by the housemates in the house, Rahul said that he believes Rakhi is no soft target and can make life difficult for the other housemates if she wants.

Calling out Rakhi's bechari act, Rahul continued, "Jasmin is a good friend of mine and I have known her for quite some time now. We have done a show together called Khatra Khatra Khatra and whatever Rakhi Sawant has done on the show was very disgusting. It was not portrayed the way she was inside the house. She was shown as a victim, Rakhi can never be a victim. She is a person who can make the chief minister or the most powerful person a victim and can scare anyone. She is so powerful that she can take anyone’s case. She can be anything but can never be a victim. Rakhi can never be a soft target. I am not commenting what the anchor said or the channel said but Rakhi can never be a target, other housemates can be her target. She is not a weak person. She is not bholi bhali and is a very clever female."

"She crossed all the limits on the show and that’s why I was never able to get along with her on the show. And the things she did were not shown outside. Whatever Nikki and Jasmin did was shown outside. Like a fight was shown where Nikki had asked Rakhi to wash utensils but Rakhi did not do her duty. I was the captain at that time and there was a huge chaos and fight because of it. But Jasmin silently went and washed all the utensils without creating any hue and cry about it. She washed the utensils for an hour alone as there were so many of them. She did not utter a single word and this was not shown on television. It was Rakhi’s duty but Jasmin did and I did not even ask her to do it. I got so happy that it was not her duty but just to maintain peace in the house she did that. I gave her noodles as a prize as the captain," concluded Rahul.

(The above story first appeared on LatestLY on Jan 08, 2021 01:16 PM IST. For more news and updates on politics, world, sports, entertainment and lifestyle, log on to our website latestly.com).