Here's good news, if you are a Rakhi Sawant fan. As it's confirmed that former Bigg Boss winner Vindu Dara Singh will be entering the reality show as the OG item girl's connection. Excited? Check it out. 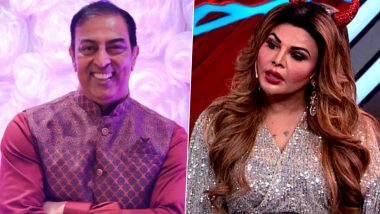 Bigg Boss 14 is soon going to witness the connection week wherein friends or family of the contestants will enter the show. Rumour had it that for Rakhi Sawant, it is going to be her husband Ritesh who will be entering the reality show, but that's not true. As former Bigg Boss 3 winner, Vindu Dara Singh will be making his presence felt as Rakhi's connection. The actor confirmed the same via his social media account Twitter and also asked fans to send queries. Bigg Boss 14: Devoleena Bhattacharjee Blasts Arshi Khan and Rubina Dilaik, Destroys House Property (Watch Video).

He wrote, "Will be entering the BB house as a connection for Rakhi Sawant." And as soon as Vindu made this official, his comment section was filled with many suggestions. There were also a few fans who urged him to boast Rakhi's morale and also claimed that she's the only entertainer of the season 14. Well, we are sure Vindu-Rakhi are going to have a blast inside the house. Bigg Boss 14: Google Declares Rubina Dilaik As The WINNER Of Salman Khan's Controversial Reality Show Ahead Of The Grand Finale.

If you’ve any feedback or questions for your favourite contestants - send it on, will make sure it reaches them!

For the one's unaware, as Rakhi's mother is unwell, the makers chose Vindu as her family/close one. In one of the recent episodes, the OG item girl had confessed to Rahul Vaidya that her husband Ritesh is already married and has a kid. This was quite a shocking revelation made by her and if true, she is surely comprising a lot. Stay tuned!

(The above story first appeared on LatestLY on Feb 05, 2021 03:01 PM IST. For more news and updates on politics, world, sports, entertainment and lifestyle, log on to our website latestly.com).