Well, this is not the first time Ajaz's name has popped up in such a case. Last year in April, the actor was arrested for indulging in acts of defamation, hate speech, and violation of prohibitory orders. 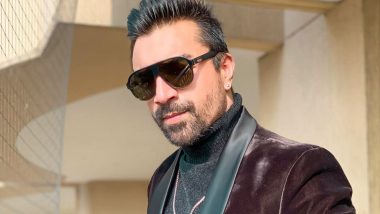 Bigg Boss 7 Contestant Ajaz Khan often makes it to the headlines and it is generally not for very good reasons. In the past, the actor has been linked to drug cases, derogatory comments and whatnot and has often landed himself in trouble for his actions. On Tuesday, Khan was also detained at the Mumbai airport after his return from Rajasthan and was interrogated for long hours about his involvement in a drug case. After eight hours of questioning, the latest buzz is that the actor has been arrested by the Narcotics Control Bureau. Ajaz Khan Arrested by Mumbai Police on Charges of Defamation, Hate Speech and Violation of Prohibitory Orders.

According to reports,  Ajaz Khan has been arrested for his link in the Shadab Batata case. Shadab Batata, son of Farooq Batata, and reportedly recovered arrested with drugs worth Rs 2 crore last Thursday and now Khan has also been found having a connection to this case. During their investigation,  two of Khan's properties were also been raided by the NCB. Talking to ETimes, NCB Zonal Director Sameer Wankhede also revealed that the actor will be facing some serious charges as well.

Wankhede revealed, "We have found his involvement in the Shadab Batata case and he is definitely facing some serious charges. His statement is being recorded at present.'' While speaking to media persons outside the NCB office in south Mumbai earlier, Khan claimed that he was not detained but himself came to meet the officers.

Well, this is not the first time Ajaz's name has popped up in such a case. Last year in April, the actor was arrested for indulging in acts of defamation, hate speech, and violation of prohibitory orders. In July 2019, he was arrested by the cybercrime police for creating and uploading 'objectionable' videos on social media.After #ArrestAjazKhan started to trend on social media, action was taken against him. Mumbai Police - Ajaz Khan Twitter Controversy – All you Need to Know About the Entire Episode!

“We have charged Mr Khan for promoting enmity on grounds of religion; waging, attempting to wage or abetting waging of war against the government; an intentional insult to provoke breach of peace and disobeying an order promulgated by a government servant under the Indian Penal Code,” Deputy Commissioner of Police (Zone IX) Abhishek Trimukhe had informed then.

(The above story first appeared on LatestLY on Mar 31, 2021 09:54 AM IST. For more news and updates on politics, world, sports, entertainment and lifestyle, log on to our website latestly.com).