Dil Diyan Gallaan: Pankaj Berry and Kaveri Priyam Open Up About Their Roles in the Upcoming Show on Sony SAB 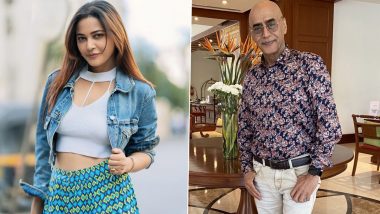 Actors Pankaj Berry and Kaveri Priyam have opened up about their roles in the upcoming family drama Dil Diyan Gallaan. The show is all about the pain and agony of parents and children because of differences between them. Kaveri Priyam Opens Up About the Characters That Excite Her; Says, ‘Yeh Rishtey Hai Pyaar Ke Gave Me a Major Break on TV’ (LatestLY Exclusive).

It revolves around Amrita, played by Kaveri, who tries to resolve the differences between her parents and grandparents. Yeh Rishtey Hain Pyaar Ke Actress Kaveri Priyam’s Instagram Account Gets Hacked.

Kaveri says: "When I first learned about the story, I immediately connected with the characters and the emotions that surrounded them. My character, Amrita, has an intriguing role to play because she is the one who brings about the revolution in the story."

Kaveri is quite known for her negative role in her first TV show Yeh Rishtey Hain Pyaar Ke.

The actress says: "In families, youth plays an important role by sorting out the differences and adapting to the demands of changing times. Her role is a reflection of a similar kind of young girl. Often one thinks that young people cannot make a difference where family issues of elders are concerned, but you will see my character doing that. Amrita is very similar to my real-life self as she is always looking for ways to adapt to changes. The show is revolutionary in itself," she adds.

On the other hand, Pankaj is shown as a depressed father as his son went abroad for career growth but the former's ego always stops him from making an effort to meet him or sort out their differences.

"I am overjoyed to be a part of this show. Dilpreet is an intriguing character and that makes me gravitate more toward playing it. I think all generations would relate to the pain of the father, the way the story tells it, and the way I have portrayed it. With this show, we hope to unfold various emotions and unspoken words among families to someday help them reconnect with their estranged loved ones," Pankaj said.

The 66-year-old actor made his TV debut with Gul Gulshan Gulfaam and also went on to act in Tenali Rama, Junoon, Ek Tha Rusty, Swabhimaan, Peshwa Bajirao and he was last seen in Kaatelal & Sons. He appreciates the plot of the show and says that the characters are relatable. "This is a show that is very close to my heart, and I believe that anyone who watches it will fall in love with the relatable characters and the storyline. Being a Punjabi and a father to a young boy who is about to fly away from the nest, I connected with this role instantly," he concludes. Dil Diyan Gallaan is starting from December 12, 2022 on Sony SAB.

(The above story first appeared on LatestLY on Dec 01, 2022 02:53 PM IST. For more news and updates on politics, world, sports, entertainment and lifestyle, log on to our website latestly.com).