Ramanand Sagar's Ramayan got a thunderous response when it was re-aired on television. Now, on Ganesh Chaturthi 2020, the iconic Jodi of Ram and Sita aka Arun Govil and Dipika Chikhlia have once again united for a project and it'll surely bring a smile on your face. 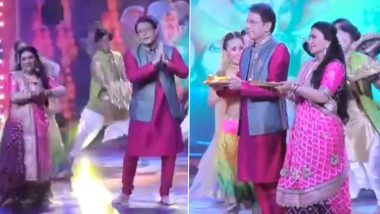 Ramanand Sagar's Ramayan got a thunderous response when it was re-aired on television a while ago. Arun Govil as Ram, Dipika Chikhlia as Sita and Sunil Lehri as Laxman was loved by the audience. The mythological saga was hit among fans with 77 million viewers watching it and creating history on Indian TV. Not just old aged people, even youngsters showed interest in the tale and that's how the initial stage of lockdown passed easily. Now, the iconic jodi of Ram and Sita have once again united for a project and it'll surely bring a smile on your face. Ramayan Actors Arun Govil and Dipika Chikhlia Wish to Seek Royalty after Their Mythological Show Sets a New TRP Record.

The two are coming back together for Star Plus' Ganeshotsav special episode. The show is said to see many prominent personalities from the showbiz and Arun-Dipika are also part of the same. A video released by the channel sees the Ramayan pair all decked up in traditional avatar. While Arun is seen wearing a maroon desi attire, on the other hand, Dipika looks gorgeous in a pink saree. The two in the clip also can be seen dancing and singing on a Ganpati song. Arun Govil Laments He Never Received An Award For Ramayan But Dipika Chikhlia Reveals They Were Felicitated (Details Here).

Indeed, it is really blissful to see the onscreen jodi of Ram and Sita reuniting for a project on Ganesh Chaturthi 2020. We bet, after seeing them in one frame many would also get nostalgic. We can't wait for the show to air on Star Plus soon. Stay tuned.

(The above story first appeared on LatestLY on Aug 22, 2020 01:21 PM IST. For more news and updates on politics, world, sports, entertainment and lifestyle, log on to our website latestly.com).