Arun Govil reveals he was never awarded for his performance of Lord Rama in Ramayan by any government be it Centre or State. But his Sita from the show, Dipika Chikhlia revealed they were indeed felicitated. 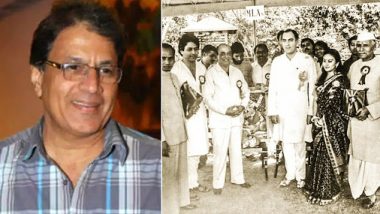 Arun Govil and the cast of Ramayan getting felicitated by Rajiv Gandhi (Photo Credit: Twitter)

Ever since Ramayan returned to Television, it had been a TRP smasher. Doordarshan never enjoyed this kind of fan following even in recent times. The channel topped the BARC list for weeks thanks to the epic. It obviously was a good lesson on Indian mythology as the present generation is unaware of the tale of Lord Rama. Even in the 80s, when the show was first aired, it led to empty roads with the whole family huddled in front of their Television sets to watch it. It's obvious to assume that the cast must have been awarded for creating such a euphoria back then. But according to Arun Govil, who played Lord Ram, neither center nor the state government ever felicitated him. That did make Twitter trend the hashtag Award For Ramayan. Uttar Ramayan Funny Memes and Jokes Featuring Luv-Kush Take over Social Media After Hilarious Ram, Lakshman & Vibhishan, Kumbhkaran Memes

Soon enough Dipika Chikhlia Topiwala posted on her Instagram page a picture where the cast was standing alongside our former PM Rajiv Gandhi. She mentions that it was the first time they were felicitated.

This is the 1st time we were felicitated ....we realized we were a part of a legacy Ramayan ..we created history ...remember the day vividly when we got a call from delhi to meet the PM ...#rajivgandhi#feliciate#delhji#ramayan#ramayanworld#sagarworld#shivsagar#lockdowndisriessa

Our guess is Govil must be talking about individual awards for his performance. If that's the case, we think he deserves all the award that there is for making Lord Rama so believable.

(The above story first appeared on LatestLY on Apr 27, 2020 04:02 PM IST. For more news and updates on politics, world, sports, entertainment and lifestyle, log on to our website latestly.com).