Hasmukh Review: Vir Das Puts Up a Good Show as the Standup Comedian With a Bloodlust in This Dark but Wacky Netflix Series

Hasmukh is an Indian web-series, with 10 episodes, streaming on Netflix. The show is directed by Nikhil Gonsalves and has Vir Das in the lead, Ranvir Shorey, Raza Murad, Amrita Bagchi, Manoj Pahwa, Suhail Nayyar and Ravi Kishan form the supporting cast. 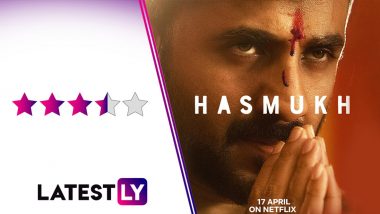 Hasmukh Review: Some jokes can kill, and in the case of Hasmukh (Vir Das), the protagonist of Netflix's new series, some comedians too. If Dexter ever became a standup comedian in India and dialled up his meekness, we can rechristen him as Hasmukh. The name might sound cheery and some of his jokes, but Hasmukh's life is far from that, and his best jokes have a hidden story of bloodlust threatening to unravel. If some couples need to engage in BDSM to 'perform', Hasmukh needs to kill someone to get his mojo to crack a good joke. Hasmukh Trailer: Vir Das Is a Killer Standup Comic, Literally, in This Dark Comedy (Watch Video).

But he doesn't indulge in wanton killing; Hasmukh's victims are no angels, either. The first time he kills someone in a fit of rage is in his hometown in UP and that someone is his conceited mentor, Gulati (Manoj Pahwa), a local comedian himself. That's when Hasmukh realises that the emotions involved in ending a life of another person sparks something in him to deliver good jokes on stage. Otherwise, he is just a blubbering mess.

Along with his bestie Jimmy (Ranvir Shorey) who is responsible for covering the dark deed, Hasmukh continues his newly-built modus operandus with much success. A video of his performance during a stage function (right after he kills a corrupt minister) goes viral and it gets the attention of Promila (Ankita Bagchi), the creative head of Alankaar channel in Mumbai. She offers him a wild-card entry in their popular comedy reality show, Comedy Ke Badshah.

Jimmy tells Hasmukh that Mumbai would be a easy field to operate, since there are so many Big, Bad Wolves there, and they come to the city to cash in on the fame . As more and more bodies pile up, Hasmukh becomes a bigger star in the city, even though at the cost of losing the remnants of his conscience, haunted by the taunting spirit of Gulati and realising that the people around him have even more sinister designs than him.

Hasmukh the show, competently directed by Nikhil Gonsalves, has a deliciously dark and eccentric premise that hooks you up immediately in the first episode itself. While it does struggle to get you connected to its protagonist's conflicted emotional state, Hasmukh's quirky black comedy provides enough gusto to keep you affixed to its content. There is a little jerk when the events shift to Mumbai, as we were getting to know some of the supporting characters then, like Hasmukh's lustful aunt ( and the local cop (Inaamulhaq) who is his fan. Nikkhil Advani: Vir Das Will Be Interesting to Watch in 'Hasmukh'.

But the City of Dreams provides even more interesting ingredients to Hasmukh's morbid concoction. The show begins to become a sports saga kind of affair, where the battles are fought in front of a live audiences, and the goals scored are the maximum laughs the contestants generate from them.

Watch the Trailer of Hasmukh below:

Hasmukh's on-stage rivalry with the more veteran, and vain opponent KK (Suhail Nayyar, too good) has some really jhakaas moments, especially when they begin taking each other down on stage. The jokes may not be as funny for a show that involves a seasoned performer as Das. But then, the in-show 'reality saga' is a discernible dig at popular standup shows on our television and we know how crass their jokes can be.

However, it is the dark drama, that is happening beyond that stage that is enthralling. Hasmukh's targets keep changing on the spur of the moment; at one point, both sides of his life spills on the same stage he is performing. Both Jimmy and he also manage to find love in their city, but even their romances suffer the consequences of their actions. The channel's creative team has its own conniving politics going on especially between Promila and Ajinkya (Shantanu Ghatak), while the inept cops try to figure why people associated with 'Comedy Ke Badshah' are dropping dead like flies.

Hasmukh is pretty fun when it revels in its dark humour. My most favourite moment came in the initial episodes and involves Hasmukh roasting a gun-toting politician so much that it ends in an unexpected gunshot. Hasmukh is gutsy and nonchalant about what it wants to show; after all, the show does make you root for a serial killer to win a stupid contest over another man, whose only fault is he is haughty. Whether you can savour the dark servings, is upto your taste. There is an episode of a child actor who tried to molest his maid and gets ousted from his show, that may not go down well with the purists (though, I have to add, that small plotline hardly mattered in the show, other than factoring for brazenness).

There is a portion in the middle, where Hasmukh slackens its grip over the proceedings, when the protagonist begins to contemplate his actions and things become more dramatic. That said, I did love the moments between Hasmukh and his videshi girlfriend Sasha (Joanna Robaczewska).

The final three episodes, though, are well-paced and keeps you on tenterhooks, especially the finale that kinda trolls you for rooting for its twisted hero. And with Das involved, you know there will be a couple of Modi jokes coming your way, and you won't be disappointed there!

Another issue I have with Hasmukh is how it sidelines its female characters towards the end. Especially Promila, who was such a compelling character in the beginning, and was someone worth rooting for, even if she was gullible enough to be deceived by Hasmukh's meekness. Towards the last episodes, her presence hardly matters, as if it is the show's way of telling that, like the sexist jokes that the contestants often make, sexism can well seep into real-life too.

Speaking of the performances, Vir Das is an actor with limitations, and his fledgling Bollywood innings is a proof of that. But Das is a revelation in and as Hasmukh, not just on stage delivering jokes (which is his forte, anway), but also in depicting the dark psyche of his character. It's isn't an easy task to portray a meek, sympathetic character, who also possesses murderous intentions, so Das does a fine job with the role, even if he struggles at times in coming off as a small-town guy.

The dependable Ranvir Shorey is smashing as the loyal manager and partner-in-crime, who goes off on his own conflicted path near the end. Among the supporting cast, Ankita Bagchi, Suhail Nayyar and Shantanu Ghatak stand out, while veteran actors like Raza Murad, Manoj Pahwa and Ravi Kishan (as the sleazy channel head) are fine in their roles.

- The Unconventional and Gripping Premise

- Some of the Black Humour

Hasmukh has a wacky premise, that isn't scared to take some surprisingly dark turns. For most of its 10-episode runtime, the show manages to keep you invested in its storytelling, assorted characters and a good leading turn from Vir Das. Hasmukh is streaming now on Netflix.

(The above story first appeared on LatestLY on Apr 17, 2020 10:21 PM IST. For more news and updates on politics, world, sports, entertainment and lifestyle, log on to our website latestly.com).