House of the Dragon is an upcoming Game of Thrones prequel that takes place 200 years before A Song of Ice and Fire. Starring Paddy Considine and Matt Smith, the series premieres on Disney+ Hotstar starting August 22, 2022. 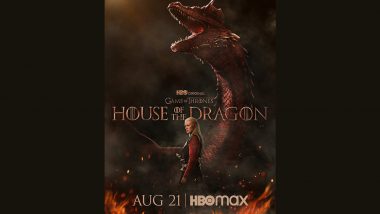 The hotly anticipated House of the Dragon is set to premiere soon, and the first reviews for the upcoming series are very positive. This Game of Thrones prequel is set 200 years before the event of A Song of Ice and Fire and will focus on the House of Targaryen. Starring in the series are Paddy Considine, Matt Smith, Emma D'Arcy and more. House of the Dragon: Review, Release Date, Time, Where to Watch – All You Need to Know About Matt Smith's 'Game of Thrones' Prequel Series!

The reviews are calling House of the Dragon a roaring success. With many saying that it really embraces the Game of Thrones feel and establishes the Targaryen's pretty well. With the series premiering on August 22, 2022, let's take a look at what some of the critics are saying about it.

BBC: It's a fascinating situation, full of understandable motives and moral quandaries, and a ticking time bomb in the form of King Viserys's health. It's pure Games of Thrones – just not in the way you remember.

The Guardian: In short, all is as it was in GoT’s heyday. Fun, propulsive, looking great and sounding passable. And that, after the bizarrely poor finale to what had been a roaring success of a show, is a relief. There are also signs that in the remaining eight episodes there will be much more of the magnificent Eve Best as Viserys’s cousin Rhaenys, known since her thwarted ascension to the Iron Throne as the Queen Who Never Was and I suspect to the writers as And One Who Might Be After All. Overall, a good time is coming.

Collider: But these moments are few and far between. The courtroom politics and the intrigue of shifting dynamics are enough to keep you hooked, and I found myself hungry for more episodes and eager to know the fate of these characters. While we only knew the Targaryens as a folklorish dynasty seen through the eyes of Daenerys, it's exciting to see the house when it was at its height. There is enough to love in House of the Dragon that keeps me coming back for more. Between the dragons, the strength of the actors, and the twists and turns of the plot, I'm eager to see where we will be taken next.

IGN: House Of The Dragon’s premiere marks a strong, well-cast start to the Game Of Thrones spin-off. This feels very close to its predecessor in tone and content, but immediately establishes a struggle for power around an amiable, weak-willed king, and vivid new characters to fight those battles. We also have dragons, inbreeding, and resentment. It’s good to be back in backstabbing Westeros. Game of Thrones Prequel House Of The Dragon BTS Video Has George RR Martin & Team Work on the Grand Sets of the HBO Originals.

Empire: For all its po-faced plotting, this show has plenty going for it. A decade time-jump in episode six, recasting several characters, gives the series a new energy; D’Arcy and Olivia Cooke (as the troubled Queen Alicent Hightower) breathe new dimensions into their aged-up characters, and the sudden switch-up suggests a show unafraid to take risks. This is a prequel that could surprise us yet. But to even skirt the heights of Thrones’ best work, it has an uphill dragon ride ahead.

(The above story first appeared on LatestLY on Aug 19, 2022 02:25 PM IST. For more news and updates on politics, world, sports, entertainment and lifestyle, log on to our website latestly.com).