Indian Idol 11: Vishal Dadlani is Proud of Azmat Hussain and is Glad to be a Part of his Recovery Journey (Check out Tweet) 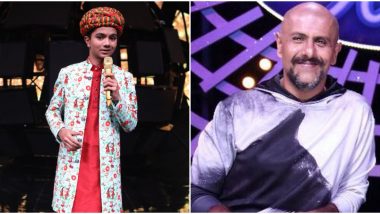 It was only recently when Azmat Hussain made headlines for his Indian Idol 11 auditions. While you may think of him as an ordinary name who's trying his luck in the reality show, he's actually a former Sa Re Ga Ma Pa L'il Champs winner. Hussain was merely 10 when he was declared the winner of the singing reality show in 2011 however, fate had some different plan in its store for him. The singer soon got occupied with drugs and what followed next was him going into depression. Sa Re Ga Ma Pa Li’L Champs 2011 Winner Azmat Hussain Worsened by Drugs and Depression Once Now Auditions for Indian Idol 11.

However, Azmat is on his way to recovery now and what better way to boost your morale than do something that cheers you the most? Azmat is now an aspiring contestant of Indian Idol 11 and judge Vishal Dadlani is glad to be a part of his small but inspiring journey. The music composer earlier tweeted his thought for #FighterAzmat and was quick to find some more support in his fans on Twitter. The boy surely knows how to own his game and talent like his shouldn't be wasted. Check out some of the most inspiring reactions for #FighterAzmat that you an idea about his social media popularity. Indian Idol 11 Participant Azmat Hussain’s Mesmerising Singing Performances From Sa Re Ga Ma Pa Little Champs 2011 That Will Win Your Heart (Watch Videos)

So proud of him. So thrilled to be a small part of his path to recovery. #FighterAzmat #IndianIdol11 https://t.co/V6ILcTzvZw

And Others Encouraging Him

U r an inspiration..

We are with you Azmat

"It (competing in 'Indian Idol') is very tough. I am a little scared because it's been a while since I moved away from the (music) field. I will work hard and hope to do well," Azmat had earlier told to IANS. He blames some bad company for his previous addictions but is determined to correct all his wrongs. We are damn proud of this 18-year-old boy and you can join us in cheering for him from the top of your lungs.

(The above story first appeared on LatestLY on Nov 09, 2019 10:01 PM IST. For more news and updates on politics, world, sports, entertainment and lifestyle, log on to our website latestly.com).