Is Abhishek Bachchan's Mysterious 'C-16' Tweet A Hint at a Sequel to Breathe Into the Shadows?

Abhishek Bachchan recently took to his Twitter account to tweet C-16 and we wonder if he was hinting about a sequel to Breathe Into The Shadows. 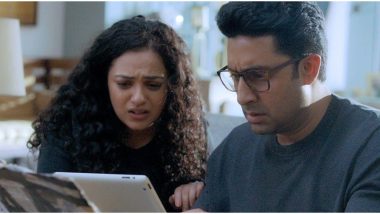 Nithya Menen and Abhishek Bachchan in Breathe Into the Shadows (Photo Credit: Twitter)

Still curious about what Abhishek Bachchan meant when he gave a chit saying C-16 to Saiyami Kher in Breathe Into the Shadows? We personally think it meant he needed her help in escaping the facility where he was getting treated for his multiple personality disorder. While the ending to Breathe wasn't explained by the show's makers, we think it's time we'll get our answers. Well, that's what we are assuming, to say the least. Breathe Into the Shadows Spoilers: 11 Questions That Bothered Us About Abhishek Bachchan, Nitya Menen and Amit Sadh’s Web-Series.

Abhishek Bachchan recently took to his Twitter account to tweet C-16. While we wonder if his tweet will be followed by something else or an announcement even, nothing much came around it. And the long wait prompts us to wonder if it was his way of dropping a hint about the sequel to his recent show. There are chances that Abhishek is already gearing up for season 2 of his thriller show and if all goes well, the makers will announce it very soon. Till then let's keep our fingers crossed. Abhishek A Bachchan! Actor Adds 'A' in his Name for Breathe Into the Shadows and Twitterati Notice His Name Change.

Breathe Into the Shadows received good reviews from the critics and fans alike. The Amazon Prime original was earlier touted to be a sequel to R Madhavan and Amit Sadh's Breathe, considering the latter's character was retained. However, they insisted on this being a new show altogether. The series also saw Nithya Menen making her digital debut while Saiyami Kher who was last seen in Anurag Kashyap's Choked had a crucial role to play.

(The above story first appeared on LatestLY on Jul 29, 2020 05:23 PM IST. For more news and updates on politics, world, sports, entertainment and lifestyle, log on to our website latestly.com).