Karan Wahi shares a perfect selfie with fans featuring his ladylove Uditi Singh. Check it out. 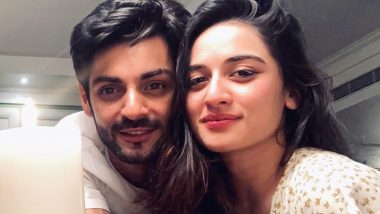 Television cutie Karan Wahi is already taken and the world knows about it. The charming lad is dating Uditi Singh and rest is history. Having said that, after making his relationship official, the TV star has never shied away from expressing his love in public. Be it wishing his ladylove on her birthday to just randomly posting photos of the two for fans, the boy's Instagram feed is filled with many cutesy moments of the lovebirds. And looks like July 14 was no different as Karan took to social media and treated his admirers with a selfie featuring him and Uditi. Khatron Ke Khiladi Special Edition: Karan Wahi Confirms Being A Part Of Rohit Shetty's Stunt Based Reality Show!

In the photo, we can see the two smiling at the lenses. A closer look at the pic and it looks like one clicked in the morning. 'UK in Mumbai,' is how Wahi captioned the post. Must say, the shine on the couple's face convey it all that how happy are the two in each other's company. And why not? As during such grim times being beside your partner is indeed warm and comfy. Karan Wahi Gets Adorable Birthday Wishes from GF Uditi Singh and Dill Mill Gayye Co-Star Jennifer Winget.

Let such posts keep on coming, Wahi, as it feels good! Earlier in an interview with TOI, when the actor was asked about his wedding plans with Uditi, he had replied saying he is totally unaware about it.

"Mere wedding plans mujhe pata chale toh mai aapko bata dunga (If I get to know my wedding plans, I will tell you) Why would I keep a secret? I did not keep a secret when I didn't have to (referring to his Instagram posts with Uditi Singh) so, that question (who are you dating) is out of the picture and now the next question (wedding question) has come. No wedding plans yaar," he had said.

(The above story first appeared on LatestLY on Jul 14, 2020 03:29 PM IST. For more news and updates on politics, world, sports, entertainment and lifestyle, log on to our website latestly.com).