Madhuri Dixit to Return as a Judge for Dance Deewane 3, Auditions to Take Place Online

Madhuri Dixit has even shot for a special promo asking the contestants to upload videos on the Viacom 18 digital platform, the network that airs the show on Colors channel. 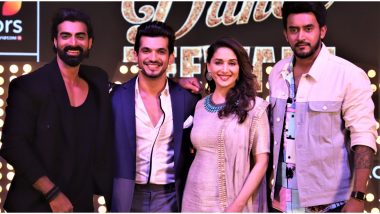 In the times of pandemic, the entertainment industry is struggling to come up with different ways to stay afloat. While the shooting of all the movies, web series and TV shows are shut down temporarily, the ones who can manage like Roadies are conducting virtual auditions to keep their momentum and schedule going. Another reality show to join the list of shows having virtual auditions is Madhuri Dixit's Dance Deewane. The show is returning for its third season and the actress will return as its judge along with Shashank Khaitan and Tushar Kalia.

The Kalank actress has specially recorded a new promo asking the contestants to upload videos on the Viacom 18 digital platform, the network that airs the show on Colors channel. When Madhuri in her conversation with Mumbai Mirror was asked about the new season of her dance reality show, she said, "One way to keep up the spirit is to let dance be a form of expression. I am thrilled that we managed to bring back another season of the show." Madhuri Dixit to Organise Virtual Dance Festival on World Dance Day.

TV actor Arjun Bijlani will return as the host of this new season and through the virtual auditions, makers will select contestants for the final showdown. The show then will obviously commence once the shootings resume in the city. But going by the current scenario, it is unlikely to happen anytime soon.

(The above story first appeared on LatestLY on May 06, 2020 09:27 AM IST. For more news and updates on politics, world, sports, entertainment and lifestyle, log on to our website latestly.com).