Actor Rana Daggubati says he realised how tough and hard the lives of Border Security Forces personnel are when he shot for the documentary Mission Frontline. Daggubati features alongside BSF soldiers in the documentary, which will premiere on Discovery+ on Thursday. 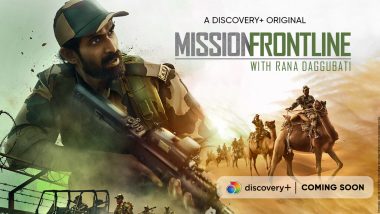 Actor Rana Daggubati says he realised how tough and hard the lives of Border Security Forces (BSF) personnel are when he shot for the documentary Mission Frontline. Daggubati features alongside BSF soldiers in the documentary, which will premiere on Discovery+ on Thursday. "In most films, if we are playing some character, we get to spend time with them but obviously, it's very little time that they give. Like we go for 4 hours, record everything they say, go back and then assume we know a part of their life. Mission Frontline: Rana Daggubati Feels Discovery+ Documentary Show on India’s Border Security Force Is a Tribute to Grit of Our Jawans

"But this is completely different, just being with them at their place of work. I got to do a simulated mission through this entire thing, so you pretty much get to see everything very up close and that was very unique for me," the 36-year-old actor said in a statement. The "Baahubali" star further said that he became aware that serving in the armed forces is a "real deal" during the filming. "This is the first time I came last in a running race. Viraata Parvam: Rana Daggubati Unveils a New Poster and Shares That the Film Will Release This Summer

I was like, this is the real deal. The film I am right now shooting, is similar costume but then, I am always the guy leading and on the film set I am usually the fittest guy, like you run forward and others are trying to catch up. But here it is like this the real stuff and it's so different," he added. Daggubati also believes the actual reality of a soldier's life can never be captured on camera.

"There is a lot of assumptions we make sitting in the cities or there is a little bit that we know through news. But what life is, hasn't been ever captured on camera before. "When there is news on the border, you hear about border men, or when something happens is the only time we get up to this news. But just as an educational exercise I think taking a leaf out of their life and bringing it to the people was for me the most unique experience of all," he added.