Money Heist: Did Netflix Say 'Bella Ciao' To The Spanish Series? Fans Panic as They Can't Find It On The Streaming Platform

As the fans are waiting for the unannounced fifth season eagerly, this is like a bad news! 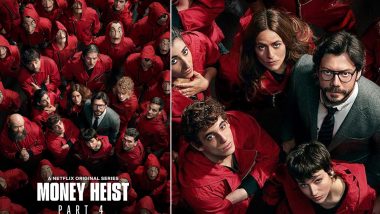 Spanish series La Casa De Papel aka Money Heist is once again trending on Twitter. Don't look out for the update of fifth season as it is not here yet. In fact, it is trending on Twitter for a rather confusing reason. Some fans found out that they cannot play the series on Netflix anymore! This led to the panic situation amongst the fans leading them to speculate that the series has been taken down by the streaming platform. Netflix's Money Heist: From Alvaro Morte aka The Professor to Alba Flores aka Nairobi - Check Out the Hottest Pictures of the Lead Cast.

Netizens tried to clarify exactly what has happened with the series and why can't they see it on their apps. On the other hand, many of them can still very much play the entire series on their apps and confirm that Netflix has not pulled it down at all. As the fans are waiting for the unannounced fifth season eagerly, this is like a bad news! Also, after the hype of the fourth season, many of them caught up with the series newly and now its disappearance has baffled them. Here are some of the tweets.

#MoneyHeist and i saw this trend , I guess it’s been removed from Netflix .

I am blessed or what? Coz I have seen it all 👺 love em’ 🌸 pic.twitter.com/nStLUGg0HO

This man below is the responsible for removal of #MoneyHeist pic.twitter.com/5sYfR9U8Se

Chill! No Announcements Yet!

My first thought came to my mind is #bellaciao 🕺 🎶

This Man Has a Separate Hate-Base

If 2020 wasn't bad enough already #MoneyHeist has gone off #Netflix for some reason. Bet I know who's tried to do this!! pic.twitter.com/FwZPhaLNJt

Why You Do This

Money Heist has four seasons on Netflix. The previous season received tons of appreciation posts from the fans. It also received the fandom that they did not have for the first three seasons as such. The fourth season's last episode was left on a cliffhanger, naturally making fans desperate for the fifth one. However, no official announcement about is made yet.

(The above story first appeared on LatestLY on Jun 12, 2020 09:53 AM IST. For more news and updates on politics, world, sports, entertainment and lifestyle, log on to our website latestly.com).