We search for captivating content on the OTT platforms every week, so that viewers can chill and binge-watch what they prefer and want. This week we have some awesome releases on OTT, let's quickly take a complete look at the series and movies releasing on the OTT platforms this week. 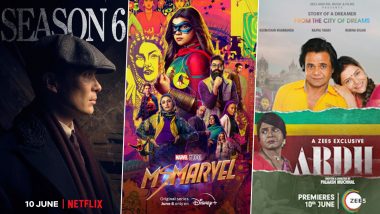 We have kickstarted the second week of June 2022 and with that there are several promising series and movies, releasing on OTT platforms like Amazon Prime Video, Netflix, Disney+ Hotstar, ZEE5, Voot Select and more. Talking about the biggest release of the week it would be Peaky Blinders Season 6, which will stream on Netflix from June 10. Helmed by Anthony Byrne, the crime drama TV series stars Cillian Murphy, Tom Hardy, Anya Taylor-Joy, Tom Hardy, Paul Anderson, Sophie Rundle and Stephen Graham, among others. The season 6 promises to bring more intriguing story with twists and turns of the gang. Peaky Blinders Season 6 Trailer: Cillian Murphy And Gang Are Back With A Bang In The Final Series (Watch Video).

Another big release of the week would be Ms. Marvel, which will premiere on Disney+ Hotstar on June 8. The synopsis of the miniseries reads, "Kamala Khan, a fangirl of the Avengers, particularly Carol Danvers / Captain Marvel, struggles to fit in until she gains her own powers." The Marvel Studios' series sees Iman Vellani, Matt Lintz, Yasmeen Fletcher, Zenobia Shroff, Mohan Kapur and others. Another interesting release of the week would be Ardh, which will drop on ZEE5 on June 10. Directed by Palash Muchhal, the family entertainer features Rajpal Yadav and Rubina Dilaik in key role. Ardh Trailer: Rajpal Yadav, Rubina Dilaik, Hiten Tejwani, Kulbushan Kharbanda’s Family Entertainer To Premiere On ZEE5 On June 10 (Watch Video).

(The above story first appeared on LatestLY on Jun 06, 2022 03:57 PM IST. For more news and updates on politics, world, sports, entertainment and lifestyle, log on to our website latestly.com).