OTT Releases of The Week: Soni Razdan's Call My Agent - Bollywood on Netflix, Emraan Hashmi's Dybbuk - The Curse is Real on Amazon Prime Video, Kriti Sanon's Hum Do Hamare Do on Disney+ Hotstar and More 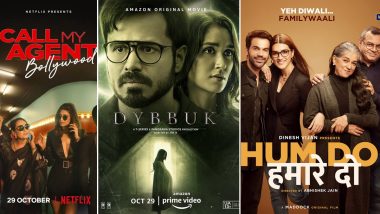 Poster of Call My Agent - Bollywood, Dybbuk - The Curse is Real, Hum Do Hamare Do (Photo Credit: Twitter)

We are stepping on the last week of October 2021, and there are several intriguing movies and series releasing on OTT platforms like Disney+ Hotstar, ZEE5, Amazon Prime Video and Netflix. Talking about the biggest release of the week it would be Dybbuk - The Curse is Real, which is all set to premiere on Amazon Prime Video on October 29.  Helmed by Jaya Krishnan, the film revolves around an antique box purchased by the female protagonist, following which the couple faces paranormal activities. The partners then seeks the help of a rabbi to solve its mystery. The horror-thriller is a remake of 2017 Malayalam film Ezra. Dybbuk stars Emraan Hashmi, Nikita Dutta, Darshana Banik and Manav Kaul, among others. Dybbuk Trailer: Emraan Hashmi, Nikita Dutta’s Hindi Remake of Prithviraj Sukumaran’s Ezra Promises a Spooky Ride (Watch Video).

Another big release of the week would be Hum Do Hamare Do, which will drop on Disney+ Hotstar on October 29. Directed by Abhishek Jain, the comedy-drama features Rajkummar Rao, Kriti Sanon, Paresh Rawal and Ratna Pathak Shah in the lead roles. The story of the flick is about a young couple (played by Rajkummar and Kriti), who are eager to adopt parents. Another interesting release of the week would be Call My Agent - Bollywood, which is all set to stream on Netflix from October 29. The web series stars Soni Razdan, Aahana Kumra, Ayush Mehra and Rajat Kapoor in the lead roles, who are on a mission to save their sinking company. The series is an official Indian adaptation of French series Dix pour cent. Call My Agent – Bollywood Teaser Out! Indian Adaptation of French Series ‘Dix Pour Cent’ to Premiere on Netflix (Watch Video).

(The above story first appeared on LatestLY on Oct 24, 2021 02:59 PM IST. For more news and updates on politics, world, sports, entertainment and lifestyle, log on to our website latestly.com).