Rubina Dilaik Talks About Her Unpleasant Experience With a Top Bollywood Director, Says He Told Her ‘I Just Feel Like Farting on Your Face’

Rubina Dilaik before entering the Bigg Boss 14 house in an interview went unfiltered and shared why she didn't venture into Bollywood. Check out the full story inside. 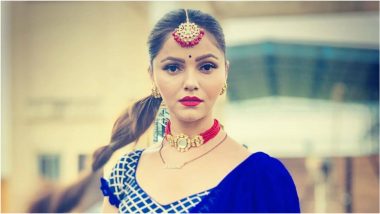 Rubina Dilaik has been a prominent face from the television industry and is currently locked inside the Bigg Boss 14 house. In a career spanning 12 years, the actress has done many TV shows as a lead and is undoubtedly the best in the business. However, one of the main reasons she kept herself away from Bollywood is her sour experience with a top director. Before entering the controversial reality show, Rubina talked about this incident in an interview with Siddharth Kannan and admitted that six years ago she really wanted to do films, but a sour experience changed things for her.  [EXCLUSIVE] Bigg Boss 14: Rubina Dilaik Is Confident of Her BB Journey, Says ‘It’ll Be a Legacy That Will Be Left Behind’.

The Shakti actress in the conversation expressed how TV stars are looked down upon and are judged on basis of brands they carry and not talent. Sharing the bad experience she mentioned that when the director asked him if she has watched his films. Rubina answered with a no and added that during those days she was in school and girls weren't really allowed to go out and watch movies. [EXCLUSIVE] Bigg Boss 14: Rubina Dilaik Reveals The Real Reason Behind Giving Her Nod To Salman Khan's Reality Show!

The director then told her, “Really? You don’t know the work I have done? I just feel like farting on your face.” She was shocked and thought to herself, “Did I hear that right?". Bigg Boss 14: Twitterati Hails Rubina Dilaik for Making Shehzad Deol Apologise on National TV for Using ‘Chakka’ as a Cuss Word!

“You are made to sit on a chair and asked ‘Tumhe pata hai maine kya kiya hai? Tum jaanti ho main kaun hoon? Tumhe pata hai tumhe kaun opportunity dene wala hai (Do you know the kind of work I have done? Do you know who I am? Do you know who is going to give you a break)?’ And at that time, the only thing going on in my mind was, ‘I want to run from here,’” she said.

Well, this is indeed sad that talent is not recognised in the industry and superficial things matter more. Meanwhile, Rubina on Salman Khan's reality show is being loved by the audience for being this strong-headed and opinionated lady. Stay tuned!

(The above story first appeared on LatestLY on Oct 16, 2020 04:49 PM IST. For more news and updates on politics, world, sports, entertainment and lifestyle, log on to our website latestly.com).