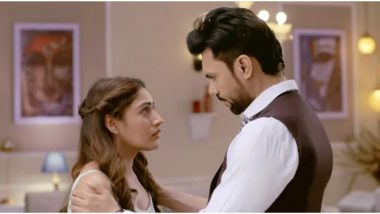 In yesterday’s episode of Sanjivani 2, Ishaani gets ready to perform the surgery, while Sid flirts with her. NV learns about the romantic surprise of Sid for Ishaani. In tonight’s episode, we see NV (Gaurav Chopra) coming to Ishaani (Surbhi Chandna) and says that he’s not aware of it. Ishaani asks him to let her do the surgery and in return, she’ll participate in the anniversary celebration. NV disagrees but Ishaani stands adamant. NV removes his shirt button and asks her to stitch it without her hand touching. Sanjivani 2 February 25, 2020 Written Update Full Episode: NV Reveals the Truth About Sid’s Condition to Ishaani and Even Saves Her From Grave Danger.

Ishaani hesitates and NV says that she can’t do it and asks her to practice well. Ishaani stops him and stitches his button but fails in it. NV asks her to understand that it’s not as easy as she thinks and asks her to keep practising. All of a sudden Sid (Namit Khanna) enters startling them. Ishaani sees the "NavIsha" mug and immediately pushes it down and it breaks into pieces. NV gets heartbroken seeing it. Sid asks what’s written in the mug and asks if it’s written "SidIsha". He’s about to check it when Rahil comes there and takes him for treatment despite Sid’s attempts. NV takes the broken pieces and leaves. Ishaani sighs in relief that Sid didn’t hear anything. Sanjivani 2 February 24, 2020 Written Update Full Episode: NV Looks Uncomfortable While Performing Puja With Ishaani During Mahashivratri.

Bittu gives her second surprise to NV and Ishaani which is a very cool bike. Both feel awkward and NV says that they can’t ride it now. Bittu asks them at least to click few pictures and Bebe agrees with her. She pushes them together and NV holds Ishaani. At that time Sid comes there and they get shocked. He compliments the bike and Bittu says that it’s for her brother NV and his wife. Bebe takes her in before she blurts out more. Sid asks NV Where’s his wife and he says very far.

Bittu gives her the next surprise and asks Ishaani and NV to cut their anniversary cake. Sid is on his way to give Ishaani his proposal card. Rahil gets shocked knowing it and rushes to stop him.

Ishaani asks NV to grant her wish and she’ll cut the cake but NV stands adamant. Bebe and Bittu force them to cut the cake and NV and Ishaani blow the candle. Sid sees it and gets shocked. He confronts NV and Ishaani for keeping him in dark all the while. He taunts Ishaani for not waiting for him and says if he was in her position then he would’ve definitely waited for her. He confronts NV for backstabbing too and says that he trusted him a lot.

In the precap, Sid with the cake knife in his hand is about to fall unconscious. The knife is about to pierce Ishaani but NV holds it and gets hurt. Ishaani dresses NV’s wound and decides to give a reality check to Sid.

(The above story first appeared on LatestLY on Feb 28, 2020 07:28 PM IST. For more news and updates on politics, world, sports, entertainment and lifestyle, log on to our website latestly.com).