As US Celebrates First Woman VP Kamala Devi Harris in 2021, Here is a List of First Female Leaders Who Held Top Positions From President to Prime Minister in India

From the President to Lok Sabha Speaker, Indian women have led the offices from many many years ago. As everyone concentrates on Kamala Harris becoming first woman US Vice President, let us look at the list of Indian women who have been elected leaders on key political positions. 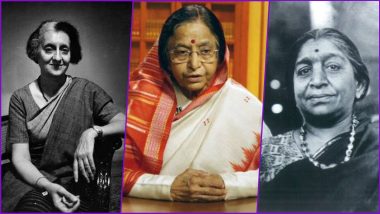 People of USA are celebrating as Joe Biden became their 46th President and Kamala Devi Harris was sworn in as the 49th Vice President of the states on Wednesday. Harris gets a special mention as she has become the first woman to take the coveted position of US Vice President. Women supporters irrespective of their country are congratulating her for this great honour and applauding about the representation it brings for women everywhere. Back in Tamil Nadu, ancestral home of the Indian-American VP, people celebrate her win.

While many people in India also laud Harris on taking the office of US Vice President and talk about women breaking the glass ceiling, we cannot help but wonder that India itself has had several women who have been elected by people to hold positions in the public office. From the President to Lok Sabha Speaker, Indian women have led the offices from many many years ago. As everyone concentrates on Kamala Devi Harris becoming first woman US Vice President, let us look at the list of Indian women who have been elected leaders on key political positions. Kamala Harris Is Not The First Person of Colour to be Elected as US Vice President; It Was Native American Charles Curtis.

Governor: Sarojini Naidu became the first female to become the governor of an Indian state of Uttar Pradesh right after India's independence in 1947. She governed Uttar Pradesh from 15 August 1947 to 2 March 1949.

Leader of Opposition:  In the year 1999, Sonia Gandhi became the first female Leader of the Opposition. She continues to be Congress interim president today.

President: In 2007, Pratibha Patil became the first female President of India. She served as the 12th President of India from 2007 to 2012 and is the only woman to have held the office. For her position, she won the 'Orden Mexicana del Aguila Azteca' (Order of the Aztec Eagle), highest Mexican honour last year.

Chief Minister: Sucheta Kriplani was India's first woman Chief Minister, serving as the head of the Uttar Pradesh government from 1963 to 1967. And in the year 2016, J. Jayalalithaa, became the first woman chief minister in India to rule the state consecutively 2 times by winning legislative assembly election.

Cabinet Ministers: In 1947, Amrit Kaur became India's first female Cabinet Minister in country's very first cabinet. In the year 2014, the Narendra Modi ministry appointed a record 7 female ministers, 6 of whom hold the Cabinet rank. It was the highest number of female Cabinet ministers in any Indian government in history. The position of Defence and External Affairs are also being held by women.

While these are some of the key position in public offices, there are other positions too in while females have taken the lead. Rukmini Devi Arundale was the first ever woman in Indian History to be nominated a Rajya Sabha member. Vijaya Lakshmi Pandit became the first woman president of the United Nations General Assembly. She too was the first Indian to take that position. India's first woman High Court judge Anna Chandy was appointed to her position in 1959.

These are some women who have achieved great feats breaking barriers of gender and took these roles in fields of politics or otherwise. While we do not take anything away from Kamala Harris' victory, it is good to remind ourselves proudly that Indian women have achieved these victories serving the highest position in the country as well. Let all of them be your inspiration to grow and achieve a lot more that you thought you could not, because you are a woman!

(The above story first appeared on LatestLY on Jan 21, 2021 08:02 PM IST. For more news and updates on politics, world, sports, entertainment and lifestyle, log on to our website latestly.com).