The Supreme Court on Tuesday said genuine PILs do wonders, but questionable PILs cause problem to the system, while refusing to interfere with Delhi High Court's order, which dismissed a PIL seeking stay of construction of Central Vista Project during pandemic. 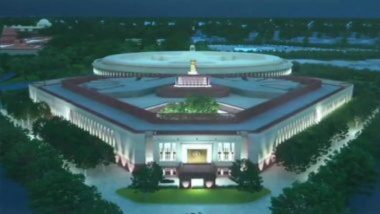 New Delhi, June 29:  The Supreme Court on Tuesday said genuine PILs do wonders, but questionable PILs cause problem to the system, while refusing to interfere with Delhi High Court's order, which dismissed a PIL seeking stay of construction of Central Vista Project during pandemic. The High Court had termed the PIL "motivated" and imposed cost of Rs one lakh on petitioners.

A bench headed Justice A.M. Khanwilkar told senior advocate Sidharth Luthra, representing Anya Malhotra and Sohail Hashmi, "Why you keep harping the project (Central Vista) is a non-compliance project. Show us the facts?" The bench shot a volley of queries at Luthra asking to show gaps in the compliance of Central Vista project.  Central Vista Project: 41% Back Govt’s Decision To Launch and Continue With the Project During COVID-19 Crisis, Says ABP-C Voter Survey

Grilling Luthra, the bench asked what is the point for the petitioners in filing the writ petition, if the project compliance report was filed before the High Court. Luthra cited the imposition of Rs 1 Lakh cost by the High Court along with strictures against the petitioners. The bench pointed out that it has given nearly 45 minutes to the counsel to argue in the matter, yet he could not convince it on the aspect of non-compliance in the ongoing construction activities at Central Vista project.

The bench also comprising Justices Dinesh Maheshwari and Aniruddha Bose pointed out that it has come on record that the project is compliant, why there is need to pursue the matter? After dismissing the petition, Justice Maheshwari told Luthra, "genuine PILs have done wonders, but questionable PIL causes problems to the system".

During the hearing, the bench said looking at the attitude the cost imposed by the High Court is too less and told Luthra that he was not able to convince the court on doubts and queries in connection with the project.

Petitioners Anya Malhotra, a translator, and Sohail Hashmi, a historian and documentary filmmaker, claimed, the High Court judgment apart from misconstruing their bonafide intentions, without cause cast them in negative light, as it dismissed their plea on the face value without any inquiry.

The petitioners had argued that their plea was a purely public health and safety issue during the catastrophic COVID-19 second wave, which ravaged the capital and exposed its crumbling health infrastructure. But the High Court construed it as an attack on the project. The plea argued that the ongoing construction activity has the potential of being a super spreader activity, on the account of to-and-fro movement of the workers from the site to their accommodation, located in various parts of the city, poses a grave risk to the health and safety of workers and the residents of Delhi.

(The above story first appeared on LatestLY on Jun 29, 2021 01:09 PM IST. For more news and updates on politics, world, sports, entertainment and lifestyle, log on to our website latestly.com).