INX Historic Token Public Offering Ends on April 22nd – Should We Run for It, or From It?

One should take the time to read the risk factors in order to make a calculated decision and weigh the risks against the opportunities. It is only prudent. But whatever the decision may be, today, there is no more question that INX has made its mark upon the capital markets' evolution. 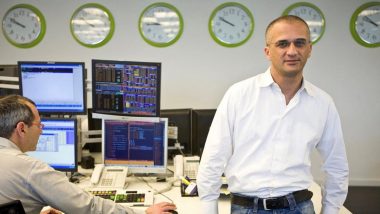 Joshua Horowitz | With massive demand from U.S. and Canadian institutional investors and over 2,000 retail investors, the INX first SEC-cleared token IPO is one of the most promising in the market, but not without risks

Gibraltar domicile INX Limited, was the first company in the history of capital markets to launch a regulated token IPO  for both the general public main-street investors and the Wall-Street institutions. This, by itself, is an evolutionary occurrence in the traditional capital markets. The INX token is a new asset class that enables major upgrades to the 'good old' capital raising methods and equity trading. They have built the world's first non-dilutive capital raising vehicle and opened the door for cryptocurrency trading to the $40 trillion institutional investors, who were sitting on the sidelines until today, waiting for regulation to catch up and allow them to dip into the hot waters of the Bitcoin and its siblings.

And regulation did catch up, it made INX its champion.

The INX exchange is due to be launched somewhere in May, according to their INX Telegram community gro1up for the first ever legal trading and listing of cryptocurrencies ands security tokens for both retail and institutional investors. The INX token itself will start trading at the same time and will be one of the first security tokens to be listed on INX alongside dozens of companies (allegedly some Fortune 500 companies as well) who form a considerable pre-market waiting list. INX aims to be the NSDAQ 2.0 of the world debuting digital assets as a replacement for equity and they are seemingly on-track for this vision to become a 2021 reality.

The INX token IPO opening price is $0.90 per token. It represents a $117 million maximum market cap for the token itself while the company has already achieved a $220 million valuation on the Toronto Stock Exchange, which means that the token is already (naively) priced at a 46.8% discount to INX's official enterprise value.

This assumes that the token represents most of the value in INX - which is not accurate. INX has a tech platform built for regulated pro-trading which INX has invested over $7 million in its creation. It is a unique platform as it is currently the only one that passed the regulatory scrutiny by the SEC and FINRA. None of the other platforms such as Binance has undergone such clearance.

The value of INX Intellectual Property, the cumulative value of the major institutional U.S. and Canadian investors who are backing the token offering, the over 2,000 retail investors and 13,000+ traders already invested and onboarded onto the INX platform, all these, ad additional significant value into the INX enterprise mix. Not to forget the acquisition of OpenFinance LLC– earlier this year. OpenFinance is one of the original regulated security token OTC traders with its scores of clientele and listed companies. Adding the acquisition in, and one realizes based on numbers alone that INX has become one of the top five global exchanges in this new capital markets’ arena. The OpenFinance acquisition has provided the company with a Broker-Dealer (BD) and Alternative Trading System (ATS) regulatory licenses on top of the Money Transmitter (MT) one they have already obtained. The licenses have significant worth due to the fact that one cannot simply get or buy these licenses without proper regulatory, strict corporate governance, coupled with a strong compliance department and official oversight - all of which INX has.

INX has some of the top American, Canadian and Japanese banks as market makers for their INX token and any other significant listings that will be raising capital on the INX exchange. These partnerships support international liquidity for the token as well as their overall operation going forward.

Analyzing this entire pack of information establishes the potential IX token value on the first day (or week) of trading to $5.03 per token without taking into account the potential profits for INX fiscal year-end.

INX already has some major trading volumes committed to kick-start the exchange operations from their financial partners. At 10 basis-points declared transaction fees, our subjective calculations show INX has potentially $50 million to $100 million in transaction fees' profits for fiscal 2021 which may increase the price per token to over $10 once announced.

INX has a 40% mandatory profit share scheme for its token holders, which is one of its strongest appeals for investors, and if indeed INX reaches these EBITA levels, the demand pressure on the INX token will further increase due to the expected massive profit share towards the end of the fiscal year.

All this potential upside is there. But it comes with significant risks that any investor must consider ahead of committing funds to the INX token.

The INX management went a long way in outlining those risks in their F-1 prospectus filing on the SEC website. Page 15 through 38 (!) describe a wide range of risks that may cause investors to lose their money. The descriptions are incredibly detailed, as opposed to the non-risk claims of the 2017 ICOs' notorious Whitepapers (thank god for small regulatory favors).  One should take the time to read the risk factors in order to make a calculated decision and weigh the risks against the opportunities. It is only prudent. But whatever the decision may be, today, there is no more question that INX has made its mark upon the capital markets' evolution.