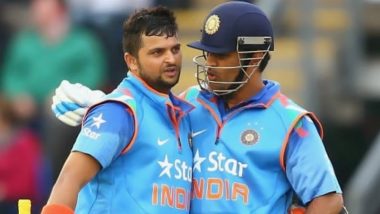 After playing international cricket for quite a long time and enthralling the fan with their swashbuckling shots, MS Dhoni and Suresh Raina both announced retirement a while ago on social media. Needless to say, the fans were in a quite a rude shock as they wanted both the batsmen to play for the last time donning the Indian colours. They started pouring tweets on social media as the two stalwarts hung up their boots from international cricket. Needless to say that even the IPL franchises including Mumbai Indians, Chennai Super Kings and others have reacted to the same. MS Dhoni Announces Retirement: Fans Urge BCCI to Hold Farewell Game For Former Indian Skipper.

The IPL franchises hailed the two on social media by posting tweets. MS Dhoni played his last ODI in the CWC 2019 which happened in England.  Whereas, Suresh Raina played the last 50-over format in July 2018 against England. The two have contributed immensely to Indian cricket and even in the IPL have given us many moments to rejoice. Now, let's have a look at the tweets below:

15 August 2020 - a day of goodbyes in #cricket! JUST IN: #SureshRaina has joined #MSDhoni in his international retirement. 322 matches, 7988 runs, 48 stellar half centuries and 7x💯 Thank you, #Raina! You've been such a champion for #TeamIndia 🇮🇳 See you at the #IPL2020 💜 @sureshraina3 #ThankYouRaina #Farewell #Retirement

The first Indian to score a hundred across all three formats, an outstanding fielder and the most enthusiast while celebrating wickets! . #ThankYouRaina for the wonderful memories! 🇮🇳🙌 . @sureshraina3

Here's to the first Indian to score a 💯 in each international format 🙌🏻 . Thank you for everything, Suresh Raina 💙 . P.S. Who else is going to play that inside-out loft over cover, on loop tonight? 🥺 . #RainaRetires

You came. You led. You inspired. ❤️ Two words to sum up your contribution to Indian cricket - Thank You. 😇 #DhoniRetires @mahi7781

One of the most likeable men in Indian cricket. Immensely talented, always played with a smile, and was a champion for #TeamIndia. Happy retirement, @sureshraina3! #PlayBold #ThankYouRaina #RainaRetires

A post shared by Royal Challengers Bangalore (@royalchallengersbangalore) on Aug 15, 2020 at 9:15am PDT

What Ganguly was to Yuvraj, Sehwag, Zaheer and Co. MS Dhoni was to Virat, Rohit, Raina and Co. A champion leader, a man who commanded respect, redefined ‘edge of the seat’ thrillers and brought joy to millions of cricket lovers! Well played, @mahi7781. Happy retirement from International Cricket. #PlayBold #MSDhoni #DhoniRetires

A post shared by Royal Challengers Bangalore (@royalchallengersbangalore) on Aug 15, 2020 at 8:43am PDT

We thank both the cricketers for their immense contribution to Indian cricket and are waiting for the watch the duo to spark fireworks in the upcoming edition of the IPL 2020.

(The above story first appeared on LatestLY on Aug 15, 2020 10:41 PM IST. For more news and updates on politics, world, sports, entertainment and lifestyle, log on to our website latestly.com).