Fruit cracking disorder occurs mainly due to heavy irrigation or rain after a long dry spell, resulting in cracks on the fruit surface. This may occur due to varietal characters, orchard soil management, inappropriate levels of water at maturity stage, and micro-nutrient deficiency. 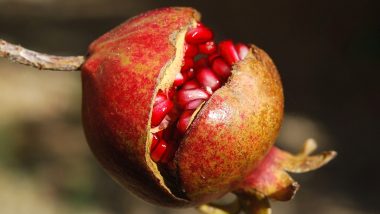 On the third day of the National Horticulture Fair 2021, which is being organised by the IIHR here, the farmers sought to know how to tackle the fruit cracking disorder. Nearly 24,000 farmers from across the country participated in the virtual interaction through 240 Krishi Vigyan Kendras (KVKs).

Fruit cracking disorder mainly occurs due to excess water during the rainy season as well as due to lack of moisture in the hot summer months. To tackle this disorder, one must maintain the right moisture level at all times. How to Wash Vegetables and Fruits Right Way? Dos and Don’ts to Properly Handle Groceries During the COVID-19 Pandemic.

"Fruit cracking disorder occurs mainly due to heavy irrigation or rain after a long dry spell, resulting in cracks on the fruit surface. This may occur due to varietal characters, orchard soil management, inappropriate levels of water at maturity stage, and micro-nutrient deficiency," an expert from ICAR said.

The disorder is generally found in apricot, litchi, cherry, apple, pomegranate, citrus, and nectarine fruits, among others. The average loss caused by fruit cracking disorder ranges from 50-85 per cent. How to Trick Your Toddler into Eating Fruits and Vegetables: TikTok Mom's Hilarious Hacks Are What Every Parent Needs! (Watch Funny Videos)

All cracked fruits lose their value in the fresh market, and are used for processing only (especially for fruit juice) provided they are not affected by fungus. Cracked fruits are susceptible to storage disease, have shorter storage as well as shelf life. It has been revealed that the shape of the fruit plays an important role in fruit cracking.

Another expert said that temperature plays a very important role in the ratio of fruit cracking. "Arid and semi-arid zones where temperature is more and humidity or rainfall is very low favours cracking. In general, there was a linear increase in cracking with temperature increase from 10 to 40 degree Celsius. Temperature also affects many other factors such as permeability of the cell walls and bio-chemical processes of the cells etc.," he said.

"When hot wind passes from the litchi fruit surface due to water loss, it becomes hard and inelastic and sudden fluctuation in moisture level leads to cracking in litchi fruit. Therefore, maintaining the right moisture level is very important," the experts said.

The experts also suggested that moisture imbalance and heavy rainfall or irrigation after a prolonged dry spell, and sudden and high fluctuation in water supply to plants may cause cracking in fruits such as lemon, litchi and cherry. Besides, deficiency of boron and calcium are responsible for cracking in cherry, pomegranate and litchi.

(The above story first appeared on LatestLY on Feb 11, 2021 05:41 PM IST. For more news and updates on politics, world, sports, entertainment and lifestyle, log on to our website latestly.com).