Presidential Election 2022: Opposition's Candidate Yashwant Sinha Files Nomination; Here is Everything You Need to Know About Him 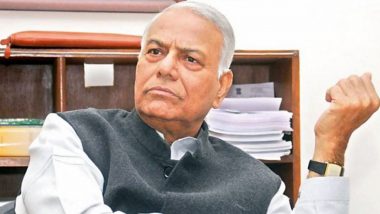 Politics has intensified regarding who will be the next President of the country. All eyes are currently on the presidential candidates. Former Union minister Yashwant Sinha was named as the consensus presidential candidate of several opposition parties, including the Congress, NCP, TMC, CPI, Samajwadi Party, National Conference, AIMIM and RJD.

Here are a few things about Yashwant Sinha:

Yashwant Sinha was born on 6 November 1937 in a Kayastha family in Patna. He holds a Masters degree in Political Science. After this he worked as a teacher in Patna University till 1960.

Sinha, who began his career teaching political science at Patna University, joined the IAS in 1960. He spent over 24 years in the bureaucracy. He served as a sub-divisional magistrate and district magistrate in various districts of the then undivided Bihar. Presidential Election 2022: TRS Party To Support Opposition Candidate Yashwant Sinha for Presidential Polls

He resigned from the IAS in 1984 and joined active politics as a member of the Janata Party. He was appointed All-India General Secretary of the party in 1986 and was elected a Member of the Rajya Sabha in 1988. Presidential Election 2022: Droupadi Murmu, NDA's Presidential Candidate Arrives at Parliament To File Her Nomination (Watch Video)

He worked as finance minister from November 1990 to June 1991 in Chandra Shekhar's Cabinet.

He was also a member of the Bharatiya Janata Party (BJP) from 1992 to 2018. He last served as the external affairs minister, from July 2002 to May 2004, in the Atal Bihari Vajpayee government.

Sinha’s disagreement with the Modi government and BJP on several issues led to his resignation from the party, and, later, entry into the TMC. Though his son, Jayant Sinha, is a member of the BJP.

(The above story first appeared on LatestLY on Jul 18, 2022 09:50 AM IST. For more news and updates on politics, world, sports, entertainment and lifestyle, log on to our website latestly.com).