The CBI on Thursday registered an FIR in the infamous ISRO spy case in the Thiruvananthapuram Chief Judicial Magistrates court against 18 people, including two top former Kerala police officers. 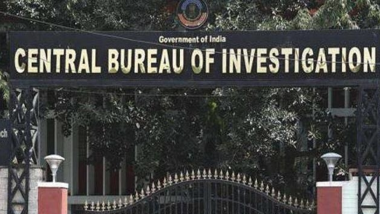 The charges that have been listed against the ex-officers include conspiracy and fabrication of documents.  ISRO Spy Case: Maldivian Lady Reveal That Kerala Police Forced Her to Name ISRO Scientist S Nambi Narayanan

Things changed for the main victim S. Nambinarayanan, then a top ISRO scientist, after numerous long drawn court battles when the Supreme Court last year appointed a three-member committee headed by retired judge Justice D.K. Jain to probe if there was a conspiracy among then police officials to falsely implicate Nambinarayanan.

The apex court which went through the report ordered the CBI to conduct a new probe.

Based on this directive, the CBI in April this year began the probe and on Thursday filed the FIR which implicates former Kerala DGP Siby Mathews who led the Kerala Police probe.

The list of accused includes former Gujarat DGP and then IB Deputy Director R.B. Sreekumar besides other police officials which includes S. Vijayan, Thampi S. Durgadutt, K.K. Joshua, who were all from the local police, which first registered the case.

The ISRO spy case surfaced in 1994 when Nambinarayanan was arrested on charges of espionage along with another senior official of ISRO, two Maldivian women and a businessman.

The CBI cleared him in 1995 and since then he has been fighting a legal battle against Siby Mathews, Vijayan and Joshua who probed the case and falsely implicated Nambinarayanan.

Siby Mathews took VRS, months before he was to have superannuated and became the Chief Information Officer of Kerala and has since retired from the post, is now settled in the state capital.

Incidentally the case emerged amid a factional feud in the Congress party between then CM K. Karunakaran's faction and the A.K. Antony faction that was at its zenith and Karunakaran had to quit office in 1995 after it was found that he was shielding his close aide and senior police officer Raman Srivastava who later became the state police chief and after retirement, he till recently was the advisor to Chief Minister Pinarayi Vijayan.

The compensation was because he had to suffer wrongful imprisonment, malicious prosecution and humiliation.

In 2019, Nambinarayanan was awarded the Padma Bhushan and Prime Minister Narendra Modi, whenever he visits the state for political rallies, often refers to the travails faced by Nambinarayanan and how the BJP treated him with respect and consideration.

(The above story first appeared on LatestLY on Jun 24, 2021 06:39 PM IST. For more news and updates on politics, world, sports, entertainment and lifestyle, log on to our website latestly.com).