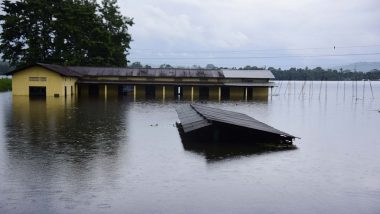 Guwahati, July 15: The flood situation in Assam remained grim with the deluge killing 59 people across the state, the Assam State Disaster Management Authority (ASDMA) said. The floods which have been triggered by the incessant rains in the state has affected 45,40,890 people across 30 districts as of July 14, the ASDMA said. Around 33 lakh people have been suffering in the  flood-ravaged districts in Assam as floodwater has inundated 3,371 villages.

The deluge has affected 128,495 hectares of crop area in the northeastern state with at least 20.11 lakh domesticated animals and over 14 lakh poultry being affected due to floodwater.  Reports inform that more than eight rivers, including the mighty Brahmaputra, are flowing above the danger mark in many places in 12 districts. Massive erosion has been witnessed in different places across the state due to heavy rainfall. Assam Floods: Devastating Images & Videos Show Extent of Destruction as Calamity Hits Nearly 9.26 Lakh Residents.

59 people dead and 45,40,890 affected across 30 districts due to floods in the state as of 14th July: Assam State Disaster Management Authority (ASDMA) pic.twitter.com/O76nvafPEn

According to ASDMA officials, the 59 deaths were reported from Biswanath, Tinsukia, Lakhimpur, Bongaigaon, Kamrup, Golaghat, Sivasagar, Morigaon, Tinsukia, Dhubri, Nagaon, Nalbari, Barpeta, Dhemaji, Udalguri, Goalpara and Dibrugarh districts. The ASDMA said that apart from the deaths due to floods, 26 others have been killed in separate landslides since May 22.

In the wake of the incessant rainfall in Assam, the district administrations have set up 517 relief camps and distribution centres in 24 districts. Reports inform that over 44,000 people have taken shelter. The National Disaster Response Force (NDRF), and State Disaster Response Force (SDRF) personnel, along with the local administration, are working to help the affected people including distribution of necessary material to the marooned villagers.

(The above story first appeared on LatestLY on Jul 15, 2020 01:34 PM IST. For more news and updates on politics, world, sports, entertainment and lifestyle, log on to our website latestly.com).