A group of thieves who broke into a locked bar did not steal cash but partied before fleeing with 30 bottles of liquor. 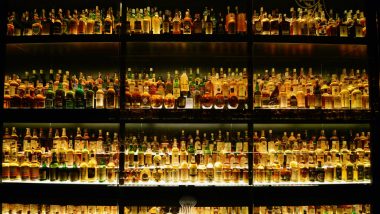 Bengaluru, April 26: During the ongoing lockdown because of coronavirus, the sale of alcohol is completely shut. Perhaps, this has led to an alcohol robbery in Karnataka's Bengaluru. According to a report, a group of thieves who broke into a locked bar did not steal cash but partied before fleeing with 30 bottles of liquor. The incident took place in KG Nagar in south Bengaluru during the early hours of Friday. Bengaluru Techie Kidnapped at Knifepoint, Robbed of Rs 4,400 Before Escaping From Captivity.

The thieves broke into a bar at Lakshmipura in KG Nagar near Chamarajpet through a ventilator. "A man residing near my bar called me around 3.30 am saying strange noise was heard inside the bar which was locked and sealed by excise officials last month. On reaching, I found that miscreants had entered and departed through a ventilator," Prasanna, owner of the bar, was quoted by TOI as saying.

The thieves brought the staircase of a neighbouring building to land on the terrace of the bar. From there, they sneaked into the bar through a ventilator. Interestingly, the thieves did not touch the cash box and other valuables. They apparently had few drinks in the bar before they left the spot with 30 bottles of liquor.

"During spot inspection, we discovered three empty glasses and a whiskey bottle on the table. It indicated that the miscreants emptied the bottle before stealing around 30 full bottles of rum and whiskey," police said. Since the bar was sealed by the excise department during the ongoing lockdown, CCTV cameras were switched off.

(The above story first appeared on LatestLY on Apr 26, 2020 11:53 AM IST. For more news and updates on politics, world, sports, entertainment and lifestyle, log on to our website latestly.com).