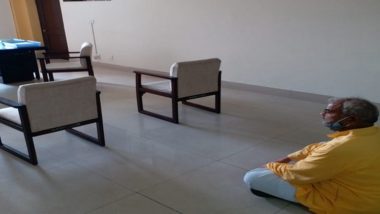 Jaipur, July 27: Demanding a copy of the order given by Rajasthan Speaker on the merger of six Bahujan Samaj Party (BSP) MLAs with Congress, BJP MLA Madan Dilawar sat on a protest in the office of the Vidhan Sabha Secretary on Monday. According to sources, the Secretary has told the BJP MLA that the order copy will be provided to him after consulting the Speaker, CP Joshi.

Dilawar had earlier filed a petition in the Rajasthan High Court for quashing the merger of BSP MLAs with Congress, which had helped the ruling party in retaining a majority in the Rajasthan Assembly.

His petition had also challenged the Speaker's inaction in not deciding on his plea seeking disqualification of the six MLAs from the Assembly.nIn the latest development, BSP has moved the Rajasthan HC today seeking to become a party in the petition by BJP against the merger of six BSP MLAs in the state with Congress party. Ashok Gehlot Vs Sachin Pilot: Rajasthan Assembly Speaker CP Joshi Withdraws His Plea in Supreme Court Against HC Order.

As the political crisis in Rajasthan deepens, BSP on Sunday had issued a whip to its 6 MLAs directing them to vote against Congress in any "No Confidence Motion" or any proceedings to be held during Rajasthan Assembly Session.

National General Secretary of BSP Satish Chandra Mishra said that notices have been issued to six MLAs separately as well as collectively, stating that since BSP is a National Party, there cannot be any merger at the state level unless there is a merger of BSP at the national level.

Notices have been issued to all six MLAs- - R Gudha, Lakhan Singh, Deep Chand, JS Awana, Sandeep Kumar and Wajib Ali, who are elected to Rajasthan Assembly. Rajasthan plunged into a political crisis after differences between former Deputy Chief Minister Sachin Pilot and Gehlot came out in the open. Pilot was removed as the Deputy Chief Minister of Rajasthan and as the state unit chief of the party.