Setting aside an order of the Punjab and Haryana High Court, the Supreme Court has said that not every case should go to the Central Bureau of Investigation (CBI). 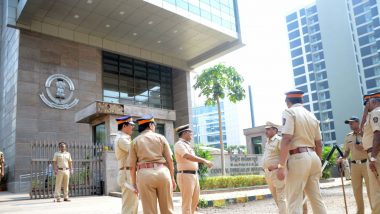 New Delhi, September 29: Setting aside an order of the Punjab and Haryana High Court, the Supreme Court has said that not every case should go to the Central Bureau of Investigation (CBI). "CBI is not God. They can’t know everything, crack every case," a bench of Justices NV Ramana and Sanjiv Khanna observed. The apex court made the remarks while hearing a CBI plea against the Punjab and Haryana High Court's order asking the premier agency to investigate a missing person case. CBI Faces Another Infighting, Deputy SP Accuses Joint Director of Fake Encounters And Corruption.

Petitioner Shyambir Singh approached the Punjab and Haryana High Court seeking CBI probe into the disappearance of his brother who went missing in 2012. Singh said that his brother had gone to collect money from certain people who had bought land from their father and never returned. After hearing Singh's petition, the High Court had transferred the investigation from Palwal police to CBI in August 2017. CBI vs CBI Battle Explained: Why Alok Kumar Verma and Rakesh Asthana are at Loggerheads? How it All Started.

The CBI had challenged the High Court's order in the Supreme Court. The agency had argued that it has limited manpower and resources and finds no reason why the local police could not have investigated the case, News18 reported. The apex court agreed with CBI's argument and said: "Not every case can go to the CBI. If every other case starts going to the CBI then there will be utter chaos. This can't be done."

"You (Singh) just follow the process of law. If police have filed a closure report then the appropriate remedy is to challenge it by way of a protest petition. Everything under the sun cannot be challenged under Article 226 before high courts," the top court told Singh's lawyer. The court also asked the Haryana Police to conduct a proper investigation in the case.

(The above story first appeared on LatestLY on Sep 29, 2019 12:58 PM IST. For more news and updates on politics, world, sports, entertainment and lifestyle, log on to our website latestly.com).