Cyclone Nisarga Live Tracker on Google Maps: Here's How to Check Path, Location And Wind Speed Of Severe Cyclonic Storm That Is Set to Hit Maharashtra And Gujarat 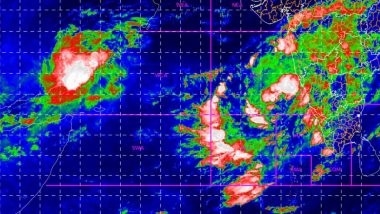 Mumbai, June 3: The "severe cyclonic storm" of Nisarga will make landfall in Maharashtra between 1 to 4 pm, according to India Meteorological Department (IMD) in its latest update. The wind velocity is expected to be around 110 kmph in Mumbai at the time of landfall. NDRF has been placed on alert in Maharashtra, Gujarat, Daman and other districts as a precautionary measure in view of the impending Nisarga cyclone. Cyclone Nisarga to Make Landfall in Maharashtra's Alibaug Between 1 to 4 PM, Wind Velocity in Mumbai to be 110 Kmph: IMD.

Maharashtra has already started experiencing rainfall from Tuesday and it is expected to increase as the cyclone nears the landfall in the state. Cyclone Nisarga Live Path Tracker Map: Check Movement, Forecast and Current Position of Severe Cyclonic Storm Which Will Make Landfall Near Alibaug Today.

You can also track the status and the path of the tropical cyclone on Google Maps. Click here to track.

Ahead of the landfall, Chief Minister's Office in Maharashtra on Wednesday released a list of 'Dos' and Dont's to stay safe'. The administration has asked people to be cautious and not believe in rumours. Earlier, IMD Director Mrutyunjay Mohapatra said that four districts of the state would be severely affected, including Mumbai Metropolitan Region, Thane, Raigad and Palghar.

Thousands were evacuated from Koliwadas (fishermen colonies) and low-lying areas of Mumbai ahead of the cyclonic storm. Just an hour left for the landfall, Brihanmumbai Municipal Corporation on Wednesday said that the civic body has arranged about 35 schools as temporary shelters for citizens, who have been appealed to relocate there. BMC has also made arrangements for pumps at more than 300 potential waterlogging areas and kept Mumbai Fire Brigade on alert to respond immediately in case of any emergencies.

(The above story first appeared on LatestLY on Jun 03, 2020 12:47 PM IST. For more news and updates on politics, world, sports, entertainment and lifestyle, log on to our website latestly.com).