Gopal Rai said that ‘Red Light On, Gaadi Off’ will be an awareness campaign and no enforcement will take place. Rai said that the environment marshals will give red roses to the violators at the traffic signal to create awareness. 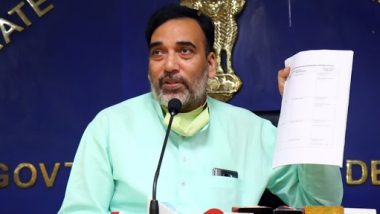 New Delhi, October 19: Delhi Environment Minister Gopal Rai on Monday said that the Delhi government will launch ‘Red Light On, Gaadi Off’ ground campaign from October 21 to November 15. He added that ‘Red Light On, Gaadi Off’ will be an awareness campaign and no enforcement will take place. Rai said that the environment marshals will give red roses to the violators at the traffic signal to create awareness. He said that the Delhi police has identified 100 key traffic signals and the Delhi government will deploy a total of 2,500 environment marshals to carry out this campaign.

Rai informed that local SDM and traffic police ACP will monitor this campaign and if required transport department's deputy commissioner (enforcement) will also oversee the campaign. He said that the Delhi government will write to all MPs, MLAs, councillors, RWAs, industrial and other social agencies to take part in this campaign. Delhi Air Pollution: Odd-Even Scheme to Be Last Option if Other Methods to Improve the Air Quality Fail, Says Delhi Environment Minister Gopal Rai.

At a press conference organised on Monday afternoon, Minister of Environment, Gopal Rai briefed the media on the impending dangers to the environment and the measures being taken to combat the same.  "Very recently, Chief Minister of Delhi, Arvind Kejriwal launched a multifold campaign against pollution in the city, titled “Yudh Pradushan ke Virudh”. The first phase under this umbrella campaign was targeted at reducing dust pollution. The Delhi Government has taken stringent measures against those who were found violating rules," said Rai.

He said, "On behalf of the Environment department, DPCC, DDA, irrigation and flood department, PWD, MCD, I appeal to all ongoing construction works, public or private that Delhi is yours as much as it is ours. We should all take responsibility. We are not in favour of taking harsh steps however, in order to save lives during this pandemic, we are bound to take stringent measures."  Rai said, "The decomposer produced by Pusa Research Institute which can turn straw and stubble into manure for further use, has been produced at a large scale and is being sprayed in various parts of the city to cease pollution caused by stubble burning and at the same time providing an effective alternative to the same."

He said, "As part of the next phase, ‘Red light on; Gaadi off’ campaign was launched by the Hon'ble Chief Minister to curb pollution caused by fuel burning. On Friday, a detailed and strategic meeting was called to discuss the planning of the same. The meeting saw the participation of all the concerned departments including officers from Environment, DPCC, Transport, Traffic Police, and Revenue. Orders were issued to them to submit a detailed action plan today. After detailed discussions and deliberations, it has been decided that this campaign will be launched on the ground on October 21, 2020, and will go on till November 15, 2020.

Rai said, “This campaign is targeted at initiating a behavioural change. It is an awareness campaign and not enforcement. It is the campaign of the 2 crore people in Delhi. People, who are concerned about the catastrophic consequences pollution can have amidst the ongoing pandemic. This campaign is about taking ownership." He said, "This campaign will be effective from morning 8 am till evening 8 pm. For this, Transport and Traffic police have identified and submitted a list of a select group of 100 major traffic points, from 11 districts. This campaign has been decided to run by way of these Marshals.  Around 2500 environmental marshals have been deployed In these crossroads. They will be working in 2 shifts, and 10 Marshals will be positioned at each traffic point. The first shift will be from 8 am to 2 pm. And the other will be from 2pm to 8pm.  Apart from this, places like ITO, which are slightly bigger in size will see civil defence officers in double quantity. 10 such places have been identified. Around 2000 Marshalls for 100 crossroads. Extra 200 for the 10 slightly greater in size. 300 marshals have been kept as reserve in case of need."

Rai said, "These Marshals have undergone extensive training. This training was executed under the guidance and surveillance of the district magistrates, officers from traffic police and vehicle department.  Their activities will be monitored by SDM, ACP of traffic police and in case of need, DC of the Transport Department will also be deployed there.  All 2500 Marshall’s will wear T-shirts, cap placards and will have stands to create maximum awareness. Following Gandhian principles. In the initial 3 days, these marshals will give a rose flower to those not turning off their car at the red light. And will appeal to them to participate in this quest to bring about a change. Your 2 mins are vital to save the lives of many.”

He said, "This campaign is touted to be a mass movement. Therefore, a letter will be written to all counsellors, MLAs, MPs and officers to participate and create awareness in their regions.  All political parties in Delhi will be requested by way of a formal letter to participate in this campaign. In addition, all RWA, market associations, eco-club, FICCI, ASSOCHAM, NGOs, officer association and trade unions will receive letters from the AAP government to be a part of this campaign.

Rai said, "This campaign calls for a collaborative effort for the betterment of the citizens of Delhi. As mentioned earlier, 15-20% vehicle pollution can be reduced by way of mass participation.  We will also request teachers to educate students in ongoing online classes about this. Children played an important role when we launched the odd even campaign. They would remind adults to follow the rules. Advertisements, FM will be a part of this execution. We believe this campaign will be a role model for this nation. Without causing any major hindrance, only by behavioural change, we can bring down the share of vehicle pollution in PM2.5."