A truck crushed a constable with the Delhi Transport Department to death as the cop tried to stop it for routine checking in outer Delhi’s Mundka early on Tuesday. 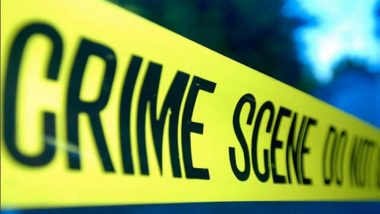 New Delhi, December 21: A truck crushed a constable with the Delhi Transport Department to death as the cop tried to stop it for routine checking in outer Delhi’s Mundka early on Tuesday. As per police, the truck dragged the constable for about 100 metres. The driver fled from the spot after crushing the constable under the truck. The incident took place around 2 am. Constable Vinod Kumar Tiwari was on night shift and was checking vehicles on main Rohtak Road in Mundka when the tragic incident happened. Maharashtra: Advocate Son Arrested for Trying to Run Over Traffic Cop in Thane; Watch Video.

According to a report published in Hindustan Times, Tiwari saw a truck coming towards him and walked closer towards the vehicle, and suddenly, a car came in front of the truck. To avoid a collision, the truck driver took a sharp turn towards the constable. In the process the truck hit Tiwari, and he was dragged for about 100 metres. The constable was rushed to a hospital where the doctors pronounced him dead.

The police have registered a case for causing death due to negligence. A manhunt operation has been launched to nab the drive. Tiwari who lived in Bindapur is survived by his wife and two children. He was attached to the transport department for the past two years.

In a similar incident on Wednesday, The drunk man dragged the cop for nearly 200 meters on the bonnet of his car when the personnel tried to stop him for driving on the wrong side near Signature Tower Chowk in Haryana's Gurugram. The accused, a resident of Delhi, was later arrested and his car was seized. A video of the incident went viral on social media.

(The above story first appeared on LatestLY on Dec 21, 2018 02:05 PM IST. For more news and updates on politics, world, sports, entertainment and lifestyle, log on to our website latestly.com).