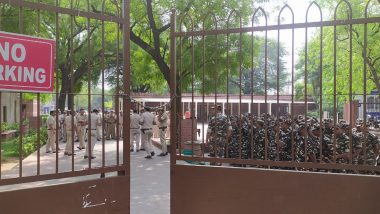 In view of the announcement, a large number of Delhi police and CAPF personnel were deployed outside the historic monument since morning. Jaibhagwan Goyal, working president of UHF, had given a call for the protest. Goyal had urged other Hindu groups to join the chanting of Hanuman Chalisa in the complex. Qutab Minar Was Actually 'Vishnu Stambh'; Structure Was Built To Tease Hindu Community, Says VHP Spokesman Vinod Bansal.

While exclusively speaking to IANS, Goyal said that he has been under house arrest since morning at his Shahdhara residence. "At least 10-15 police personnel are outside my house. They are not allowing me to leave,"the UHF president said.

The right-wing group is demanding that the mosque inside the Qutab Minar be declared a temple and permission given for chanting of Hanuman Chalisa on its premises. It has sought rechristening of Qutab Minar as 'Vishnu Stambh'.

As the activists reached the historic minaret and proceeded to recite Hanuman Chalisa, they were detained by police at Bhul Bhulaiya, outside the complex. They have reportedly been taken to the nearest Mehrauli Police station.

(The above story first appeared on LatestLY on May 10, 2022 05:41 PM IST. For more news and updates on politics, world, sports, entertainment and lifestyle, log on to our website latestly.com).