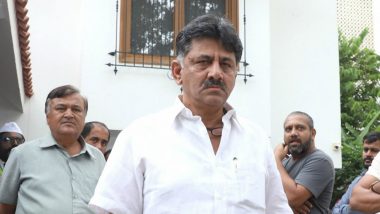 Earlier, Aishwarya was summoned by the Enforcement Directorate (ED) in September in 2019, when her father DK Shivakumar in Tihar Jail over charges of money laundering. Since Shivakumar and Krishna are considered to be family friends for last two decades, the alliance might become the second high-profile affair in the political circles of Karnataka.

It is to be known that Cafe Coffee Day founder -- VG Siddhartha -- committed suicide by jumping into Netravathi river in Mangaluru in July 2019. Following the suicide of Siddhartha, rumours spread that he was under tremendous pressure to repay creditors amid piling debt. Also, news about hiding undisclosed income from tax authorities make the news headlines.

(The above story first appeared on LatestLY on Jun 04, 2020 04:59 PM IST. For more news and updates on politics, world, sports, entertainment and lifestyle, log on to our website latestly.com).