An earthquake measuring 3.5 magnitudes on the Richter scale struck Delhi and adjoining areas on Sunday. 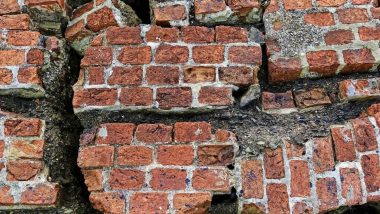 New Delhi, May 10: An earthquake measuring 3.5 magnitudes on the Richter scale struck Delhi and adjoining areas on Sunday. According to reports, earthquake tremors were felt in parts of Delhi and the National Capital Region or NCR. According to the National Center for Seismology, the quake was recorded of 3.5 magnitudes on the Richter scale. No significant damage or loss of life was reported from the earthquake. Dust Storm Sweeps Delhi-NCR, Sky Turns Dark, Residents Share Video And Pictures of Sudden Change in Weather.

The earthquake in Delhi occurred hours after a sudden change in weather. Dust storm and light rainfall surprised residents of Delhi-NCR and brought much-needed relief from the sweltering heat. Delhiites woke up to a sunny morning, but the visibility got reduced to a minimum around noon as dark clouds covered the sky. This condition is likely to stay for a few more days and will delay the onset of the heatwave.

"The activity is due to western disturbance. It has resulted in dust storms, thunderstorms and light rainfall. The wind speed is currently 60 km per hour," Kuldeep Srivastava, Head of IMD's North-West Meteorological Centre, told news agency IANS. "Temperature will drop and will be around 35 degrees celsius," he added. Last month, mild earthquakes jolted Delhi-NCR twice.

(The above story first appeared on LatestLY on May 10, 2020 02:11 PM IST. For more news and updates on politics, world, sports, entertainment and lifestyle, log on to our website latestly.com).