While the build-up in Depsang was not considered as part of the current standoff that started in May last year since the escalations here took place in 2013, India has insisted during the recent military commander-level meetings to resolve all the issues along the LAC. 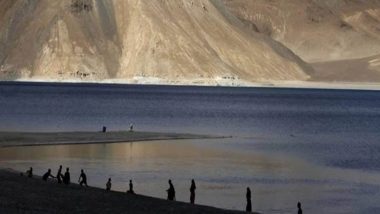 New Delhi, July 30: India and China will hold the 12th round of Corps Commander-level talks at Moldo on the Chinese side of the Line of Actual Control (LAC) on Saturday to iron out an agreement for the next phase of disengagement in Eastern Ladakh. "The talks will begin at 10.30 am," said a military source.

The latest round of talks will take place after a gap of three months. Indian military delegates will meet their counterparts to discuss disengagement of troops at the friction areas such as the Hot Springs, Gogra and the Depsang plains spread over 900 sq km land.

While the build-up in Depsang was not considered as part of the current standoff that started in May last year since the escalations here took place in 2013, India has insisted during the recent military commander-level meetings to resolve all the issues along the LAC. 12th Round of Corps Commander Level Talks Between India and China to Be Held in Moldo.

"The initial attempt will be to resolve the issues in Gogra and Hot Springs. Finding a solution to Depsang might be tricky and take longer time," said an officer. In April, during the 11th round of Corps Commander-level talks, the focus was on disengagement at the friction points of Gogra, Hot Springs and Depsang.

On February 20, the two sides had held the 10th round of military dialogue to de-escalate tension along Line of Actual Control. China has been enhancing military infrastructure across the LAC for some time now. Looking at it, India has changed its posture towards China, and unlike its previous defensive approach that placed a premium on fending on Chinese aggression, India is now catering military options to strike back and has reoriented its forces accordingly. China: Zhangjiajie To Close Tourist Sites After Resurgence of COVID-19 Cases in the City.

India has reoriented around 50,000 troops whose main focus is on the disputed borders with China. The reorientation comes at a time when China is refurbishing its existing air-fields in the Tibetan Plateau that will allow twin-engine fighter aircraft to be stationed, sources said.

In addition, China has also also brought troops from the Tibet military region to the Xinjiang region. The Chinese side is also rapidly building infrastructure in the Tibetan Plateau.

(The above story first appeared on LatestLY on Jul 30, 2021 06:06 PM IST. For more news and updates on politics, world, sports, entertainment and lifestyle, log on to our website latestly.com).